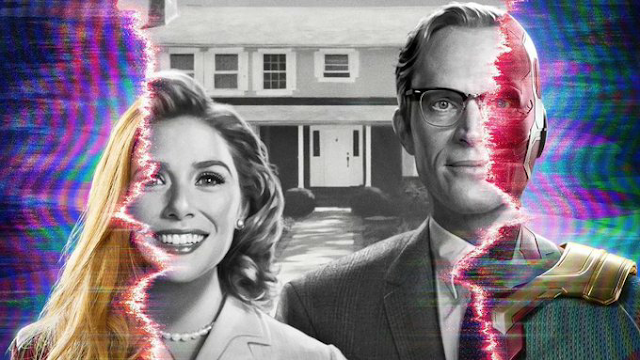 Marvel Studios first high-budget Disney+ streaming show has now come to an end. It’s safe to say that the series has been a success. While it was off to a bit of a slow start the popularity of the show soon ramped up. Social Media was abuzz with the show every Friday. I covered the show from week to week on Twitter in the form of micro-reviews that I’ve dubbed ‘Shout-Outs’. Now, it’s time for a proper review of the entire series. Is the series worth a watch, even if you’re not really a superhero fan? What is it that this series does differently in comparison to the movies and other Marvel TV shows? Well, let me tell you all about it.

A little warning before you read any furthers: this review will include mild-spoilers. While I always try to write these reviews with spoilers free, it’s impossible to probably talk about the series without going a little more in-depth about some aspects. I won’t give away major reveals or twists, but you’re still going to learn more then what has been in the promotional material and that will impact your viewing experience. You’ve been warned.

With that little disclaimer out of the way, let’s dive in.

At the start of WandaVision, Wanda and Vision are a newlywed couple who have just moved to the 1950’s suburban town of Westview. Despite Wanda’s powers and Vision being a synthetic Synthezoid, they try their best to fit in. They have Vision’s boss and his wife over for dinner which almost goes wrong due to Wanda’s powers messing up the cooking, they enter the town’s talent show etc. While Westview seems idealistic, weird occurrences start happening. From a voice seemingly talking to Wanda over the radio, weird noises around Wanda’s & Vision’s house to the town’s people and aesthetic switching time-period overnight and nobody in the town even noticing it. This leads us to the reveal that everything that has happened in Westview is due to some sort of force-field across the town that is altering reality and keeping people trapped in the town.

What I described above is not only the setup of the show but the first three episodes in a very brief fashion. This is where the disclaimer about mild-spoilers rears its head again. The first and, depending on the way you look at it, the biggest flaw of WandaVision is its slow start. The marketing campaign put a lot of focus on the sitcom aspect of the show. Almost every episode is set, is influenced by and mimics an old TV sitcom from across television history. All the way from The Dick Van Dyke Show to Modern Family. It’s an integral part of the mystery of the show (what is going on here and how did it come to be?) and also its identity. Not only that, but the sitcom setting has a deeper meaning that ties into the theme of each episode. The different eras of sitcoms are faithfully reproduced, from the sets and costumes to the cinematography to the score.

The effort and the attention to detail in sitcoms, as well as the entire show, has to be commended. However, the first three episodes lean heavily into the sitcom idea. So much so, that the first two to three episode’s pacing is very slow. There are clues, references and easter eggs galore in these first three episodes but for the most part, it’s just Wanda & Vision in sitcom bliss. Interesting in its own way, sure, but I wouldn’t call it gripping. It’s only at the back half of episode three that the show starts to ramp up. It’s then when the series shows the true scope of its story, introduces a second narrative, that the show really starts to make momentum. It’s then when the series comes into its own and becomes this enticing blend of a sitcom, mystery, thriller, drama and superheroes. I know that sounds like a weird and clustered blend but trust me, it makes much more sense when you watch the show.

As you can read, WandaVision does a lot and does those things well. The show, however, would not nearly be as strong or memorable if not for the characters at its heart. In the end, if you take away the extravagant sitcom aspects and sets, the mysteries and the superheroes it’s a story about a very human thing: grief. Wanda’s struggle with her grief over the many people she has lost in her life and the trauma she has cropped up because of is at the core of the show. This struggle is what makes Wanda as a character one of the most fleshed out and relatable character in the entirety of the MCU.

What also cannot be understated in this is the performances of the cast. Elizabeth Olsen’s performance of Wanda is award-worthy. From the way, she tunes here performance to the different sitcom eras to both the underlying light and darkness the character has. It’s all incredible and it would be a shame if she doesn’t at the very least gets recognized for her performance by the way of award nominations.

Paul Bettany acting as Vision is also quite, quite good. Vision’s entire journey continues his path from the movies. One of self-realization. To figure out who he is exactly and what his place in the world is (which in this show has quite the double-meaning). Vision is much more emotional in the series, much more of a fully realized human being. This makes him much relatable than he ever was in the movie and the end of his story here one of the strongest of all of the characters because of it.

Most of the rest of the cast does a good job as well. There are some duds here, sadly, but 90% of the cast is good in the role that they are given. From the side characters, it's only really Teyonah Parris’s Monica Rambeau that gets any worthwhile development though. That probably another flaw of the series. How fun and entertaining most of the side characters are, from Randall Park’s lovable FBI Agent Jimmy Woo to Katt Dennings’s snarky and ‘notoriously self-involved’ Dr Darcy Lewis. They are a lot of fun to watch and this trio is what carries the second narrative of this show.

The start of the show is slow and that might turn off viewers. Does the show have any other problems that I need to be aware of? Well, sort off. The mystery aspect is what most fans have latched onto during the show’s run. The speculations of what was truly happening beneath the surface and the search for every easter-egg and potential clues. It’s definitely a lot of fun about this series and undeniably an aspect of the series, but I do caution you to not go too deep into it. Many reasons why viewers were left underwhelmed but the final episode was because they had expected it to be much bigger then it ended up being based on the many theories that were out there. When those theories turned out to be wrong, they were left disappointed.

If you look at the final in the same light that you do the other episodes, without the extensive theory crafting, you’ll find that it perfectly matches the series itself. It neatly ties up the story, focusing more on giving the characters a fitting end to their WandaVision journey then setting up the next few MCU projects. Some side-characters don’t get such a neat ending and its rather standard MCU fair, which is definitely one of the few flaws of the final of the series, though that doesn’t take away from the final too much.

With WandaVision, Marvel is off to a very, very good start on Disney+. It’s a very well-produced show that has an excellent set, costume design and acting. Above all, the show is a strong narrative regarding the effects of grief and trauma. It’s a story that works because of the human element at its core. It’s very different then what the MCU has turned out up until this point while at the same time still feeling like a part of it. The latter can, at times, be a problem but doesn’t take away much of the series. If you’re a fan of the MCU, or the opposite, is tired of some of the conventions of the MCU, then WandaVision is a show for you.