This little corner is turning one-year old today, let's look back at this first year. 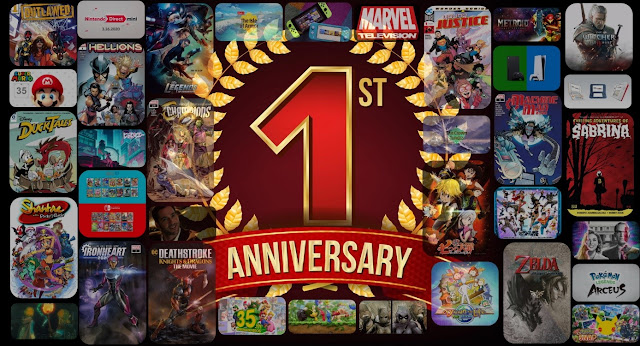 On March 23rd, 2020 my blog, this blog, officially launched. After years of wanting to stretch my creative muscles, I finally bit the bullet as they say and started this blog. Now that we’re a year further, I want to write a little retrospective. A little look back at the last year of writing, from how the ways I manage the blog changed to how my writing improved along with some behind the scenes titbits.

Looking back; a year in retrospect

First, let’s start with a fun little anecdote. March 23rd might be the date that my blog launched, but it wasn’t the date I had in mind. I intended for my blog to launch two days later on the 25th, the same day as my first post ‘Let's talk about Marvel's Outlawed’. However, me being me, I didn’t quite understand how the Wix website tool worked yet so when testing if the site worked I accidentally launched it two days prematurely. Oh well!

Going back in history though, you won’t be able to find many older posts through Google. The earlies are sometime in October. Why is that you might ask? That’s because, in the first few weeks, my site didn’t have a dedicated URL. I didn’t have the money for it until a few months in. After I did buy myself the letstalkabout-blog URL it then took a few months for Google to recognize the site and start listing it. As a result, many of my earlier posts aren’t listed on Google. I’ve tried to get them to be listed on Google, but to mixed results sadly.

On the one hand, I would like to get more posts listed on Google. You know, to increase the organic traffic. Said organic traffic, which for those of you who don’t know means traffic through search engines and not through social media, direct link sand such. The numbers of organic traffic have been decent for my site but it could of course be better. More of my stuff on Google means that there is a higher chance that people will click on it and read my stuff more consistently. Or at the very least make a articles numbers skyrocket as it did with my ‘Let’s Talk About The Legend of Zelda 35th anniversary: what can we expect?’ post. To this day, it brings in many readers and that article is still bringing and has thus become my most read post. Don’t ask me why that is exactly, I honestly can’t tell you, but I’m grateful for it.

On the other hand, though those first few months of posts are rough. Like many creators out there I’ve become not too fond of my own earlier work. It’s riddled with mistakes, both grammatical as well as in its information, has overly long paragraphs and goes on for far too long. It’s all stuff I’ve been working on and have gotten better at but are still in those earlier posts. Sure, I could rewrite these older posts so they are up to par with the current standard and become less-cringe worthy to me but I won’t. Even if these posts are lacking in quality they are a part of my writing history. Changing them, so very drastically, just seems wrong. Like ignoring that part of history.

Some of them I do want to do this with like most of my game reviews, which I’ve sporadically done already, but those are more evergreen content as well as ones I can alter much more easily without drastic changes. Plus: reviewing every single videogame in my collection, both present and future, is a weird little goal of mine. So yeah, I want those to be somewhat consistent in format and quality.

What has probably also been a factor in the rise of quality is probably the fact that I’ve got more time to write each post. When I first started my schedule was a consistent Monday-Wednesday-Friday. While that was my ideal schedule when I was first thinking about the blog I quickly learned that it was too much. I couldn’t keep up with the schedule, didn’t have enough time to properly write each post and ran out of ideas quicker. So after two months, I switched to the Wednesday-Saturday with the occasional Monday article you all know today. And that’s been working out much better.

That’s enough reminiscing about the past. An anniversary is not just a moment to look back but is also great opportunities to look forward. What are some of the stuff that might come to Let’s Talk About in its 2nd year? Well, I don’t have any big changes in mind for year 2 but I do have some ideas in regards to some new content and ways I can grow.

For the former, the types of content, I’m keeping the current release schedule and balancing act. A discussion article on Wednesday under the Let’s Talk About banner with reviews on Saturday and Monday’s as a dumping ground for occasional extra posts. Said reviews will alternate between videogames and comic books & TV/Movies. In terms of new stuff, I’ve got a couple of ideas. The first one is that I might do more with demos. I posted what was essentially my impressions of the Project: Triangle Strategy Demo last month, a few days after said demo came out. Like I said in the opening paragraphs of that post, taking a look at Demo’s was something I’ve been thinking about for a while.

I wanted to do so with the Pikmin 3 Deluxe demo, but couldn’t find the time to do that before the game itself came out. The same thing is happening again at the time I’m writing this. The Monster Hunter Rise 2nd demo is downloading on my Switch as I type this but I know that I don’t have the time to get a post up and running before the game launches later this week. One of the reasons I wanted to take a look at demos is that I could time those with the game’s actual release and get more ‘recent’ content up.

Just like some of my inspirations, Atop the Fourth Wall for the comic stuff and SomecallmeJohnny for the gaming, this blog falls into (to quote Reddit here for a minute) the patient category. It’s mostly older stuff with some ‘new(er)’ things sprinkled in here and there. It’s the way I like it, though I do try to balance the old and the new every month just like I do with the comic and videogame stuff. I’m going off track here but the point here is that I want to gauge if people are interested in me taking a look at the Demos that are floating around on the Nintendo 3DS/Switch Eshop even if they don’t tie-in with the games actual release.

A second project I’m thinking about doing is quite a big one. A 23 and counting movie project known as the Marvel Cinematic Universe. As you’ve might have noticed already I got myself Disney+ late last year. Thus, I got access to almost every single MCU movie now and I’ve been wanting to take another look at them. And why not review them while I’m at it, no? I could watch the movies on my Saturday evening and get a review up for them the following Monday, assuming good planning and nothing unexpected happens. Same question here as with the demos: anyone interested in that? Please let me know. If it turns out to be both doable and success, it could open up for the same to happen with other movies and shows.

Finally, the stars are aligning for a potential new theme month. Early into this blog’s life, I did a theme month cantered around the show Lucifer. It was a mixed success at best, which is why I haven’t really bothered with it since then. However, I found myself in a situation in which I could get another theme month going if I play my cards right and start preparing for it early. A Zelda Month with reviews of Skyward Sword, Link’s Awakening and perhaps even the Oracle games with articles such as the history of the franchise as well as my own personal experience with it. All with the franchise’s 35th anniversary in mind, of course. This Zelda month would be in July so if you want to see it, then once again, please let me know.

And that was about it. I thank you not only for reading this post but for reading my blog as a whole. I thank you for having been here in this first year. Either from the beginning or recently, it doesn’t matter, I thank you and appreciate your support. I hope that you stick around for year 2 and let me know what you like to see.