DC's Future State: how good was it?

Is the 'Destiny of the DC Universe' any good? 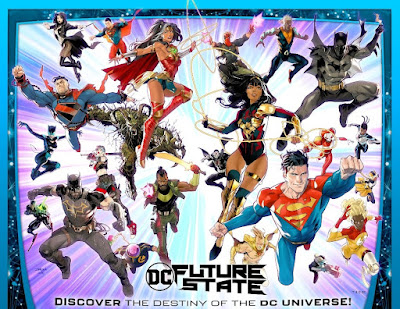 We’re now all and well in March and you know what that means: DC Future State is now over. OK, perhaps that’s not what you were thinking of when March rolled around but I sure did. Future State ran from January 2021 to February 2021, completely replacing the normal output of DC superhero comics. I’ve got a bit of a history with Future State which was something I discussed in ‘Let’s talk about DC’s newest event: from 5G to Future State’ back in December of last year. While writing that post, I thought about how neat it would be if I also wrote an article detailing how the event turned out once it had concluded. As such, I’ve read every single Future State comic DC put out, even if they were terrible. I even wrote these little micro-reviews for them on Twitter these last two months as a way to chronicle the journey. So, how was it? Is Future State any good? What are my thoughts on it as a fan?
In short: while I did enjoy the event overall, I’m happy that’s not replacing the entire DC line-up as was once the intention. There are things here that I’d happily see continue, while there’s also plenty of things I’d rather not. Sadly, that last one is something that’s reason for concern.
Let’s dive in.

Let’s start with the story of Future State. No, not the backstory of how the event came to be but the overarching narrative that ties all of the Future State titles together. After the events of Dark Nights: Death Metal (see Review: Dark Nights: Death Metal for more info and my full opinion on that) the entire DC Multiverse has been reset. Or more accurately the Multiverse has been replaced by the Omniverse. No longer are there just 52 Earths in the DC Multiverse, but there is now an infinite number. The future has yet to be written in this new DC Omniverse and Future State shows how that future could potentially turn out. Or, as many Future State titles themselves put it: “From the ashes of Death Metal rises new life for the infinite Multiverse and glimpses into the possible unwritten worlds of tomorrow.” Think back to something like DC’s earlier event The New 52: Futures End or something like Back to the Future 2.

As an event, as a series of comic books, Future State suffers from two big problems. The first one is its story premise. In short: the future that is shown here sucks. I don’t mean that in the way that it’s my opinion that the future shown here (though I can’t say that I onboard with it either) but that the future just is a bad one. Many of the titles all have a sense of dread and despair. Many start in the vein of ‘things used to be good, but then … happened and now … are dead and/or the people mistrust us’. It’s, for the most part, a bleak future for the DC Universe and that gets old really fast. The more titles came out with this basic premise, the more tiresome I grew of it.

What doesn’t help it either is the large time-skip. Time-skips are tricky. If handled well it can introduce great intrigue in what caused the world and the characters to change so much or not at all. It allows said characters to grow up and change in a way that superhero comic-books with their sliding time-scales do not allow. On the other hand, they can be very jarring and disorienting. Not seeing things play out naturally can be very jarring and cause a disconnect with the reader. This is especially true if the future that is shown doesn’t organically fit with how the present is. If the future shown is too much of a leap for long-time readers and it’s not properly explained how things turned out this way exactly.

Future State suffers more from the latter than the former. Often while I was reading the books, especially in those books in which I was enjoying the story, I was pulled out of the story by moments that didn’t really make sense to me. While I thoroughly enjoyed the Next Batman I had to constantly ignore the little voice that told me that Bruce Wayne AKA Batman would ever leave Gotham in this state. That none of his Robin’s would even attempt taking over the Batman mantle. How weird it was that Renee Montoya had such a hard anti-mask stance even though she has not only dated a mask, the Kate Kane Batwoman, but has been a superhero herself: The Question II. I don’t think that I’ll have to tell you that (periodically) breaking the suspense of disbelief of a reader isn’t a good thing.

While in many was Future State is very similar to the standard setup of comic-book events, in others it’s not. Where most events have a main series of books with a few limited series and one-offs as tie-ins as well as currently running series doing a tie-in issue or two, Future State is different. It a series of multiple limited-time issues with many of them featuring backup stories. This leads us to the second big problem with the event. The cost of the entire event is high. A large part of the Future State books is printed in ‘prestige’ format. AKA: they are much longer and thus much more expensive. While backups are nice and the longer length does make (most of the) books appear in much better paced, it’s no denying that the higher price-tag is not doing even any favours and is a turn-off for many.

I’ve been hammering on Future State’s problems up until now but that’s not to say that Future State is a terrible, even bad, event. There are things it excels at. The setup of the story is a good one, even if there’s too much of the same thing going on and not every one of them smartly uses the time-jump. The once that do take advantage of it do so very well. The one I’m currently thinking about is Nightwing. Even if the magistrate controlled Gotham isn’t something I liked all that much, the situation did allow Nightwing to step up in a good way. His solo book showed really showed the strength of the Nightwing character. That he could definitely step up and fill Bruce’s shoes, but do it in a much more hopeful way.

And that, my friends, is where Future State’s true strength lies. Its characters, especially the new ones. From the Jace Fox Batman to the Yara Flor Wonder Woman to even some old returning characters like Nubia. They are all very interesting, compelling and have a lot of potential going forward. This isn’t very surprising honestly, as Future State’s main purpose was to introduce these new characters. A remnant of the event meant to completely replace the normal DC Universe no doubt. And characters which we’ll be seeing more off, but that’s a discussion for another week. Not every book hits the nail on the head with its characters. The Flash and particularly Shazam do not, but most of them do.

Another strength of Future State is the overall quality of the books. Even if the story or the characters are lacking, the overall production quality of each book is high. The quality of the writing, art and pacing are generally speaking above average. I got the feeling that, even if not everything worked out, the team behind each book was putting in the effort to make it as good as possible. I do appreciate that. I also very much like the longer length of most books as well as the inclusion of the backups. As stated before, the longer length generally speaking means that the story has more time to be told, as I said before.

The backups are not only a good way to give the reader more bang for their buck, but also offer more variety and give lesser characters a chance to shine. You know, keep them relevant as well as see if they might be able to support their own (limited-)series. I hope that’s something more DC Books will be doing going forward. The new Batman is doing it at least.

Overall Future State is a decent event that is pretty enjoyable overall and downright excellent when focusing on its characters. There are some bad books of course. Books that have stories that are just not good, don’t have any interesting or well thought out stories or good characterization of their characters. Perhaps don’t even understand the characters that they are writing about. Most books, however, are good. Most books have a good combination of writing, interesting story, and especially character work that makes them enjoyable. Makes them worth a read if the solicitations interest you.