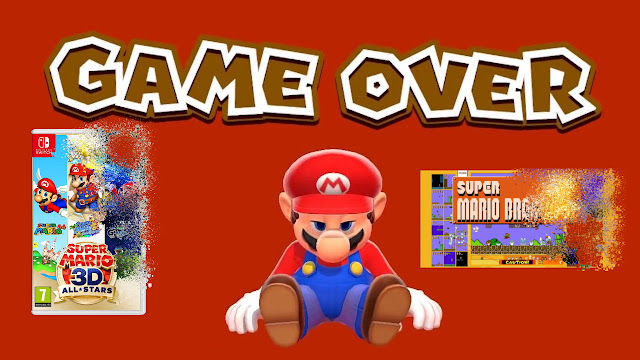 Today, on March 31st 2021, many Mario related products will be pulled from stores. From Super Mario 3D All-Stars to Super Mario 35. Even the special release of Fire Emblem: Shadow Dragon & the Blade of Light, the first time it has been localized and released outside of Japan, will be gone after today as well. Many, many folks and publications have written about this unfortunate situation and I would like to add to that conversation. Not just about the ‘the day Mario dies’ as many have started to refer to it but limited releases in general. Why what Nintendo is doing is anti-consumer, what makes this situation different from other limited releases and the changes of Nintendo pulling this stunt again in the future.
Let’s dive in.

So, what's up exactly?

First, a recap of the entire situation so that everyone can following along even if they haven’t been paying close attention to the entire situation. On September 3rd 2020 Nintendo held a Direct solely focused on Mario’s 35th anniversary. The heavily rumoured 3D Mario collection was revealed as Super Mario 3D All-Stars for one. Pretty exciting for fans, though not without some disappointment. The exclusion of Super Mario Galaxy 2 from Super Mario 3D All-Stars is a prime example. However, most of these games came with a big stinker of a caveat.
Super Mario 3D All-Stars and Super Mario 35 would only be available to buy until March 31st 2021. You’ll have to hope that an outlet still has some unsold stock or that you can find it for a reasonable price on the 2nd hand market if you want to play it after this date. Not just the physical version would not be distributed to stores anymore, the digital version of Super Mario 3D All-Stars will be pulled from the Nintendo EShop. In the case of Super Mario 35, it’s even worse. The servers that the online Battle Royal/Tetris 99 inspired will be shut down at the end of today meaning won’t be able to play the game at all anymore.
And that’s just the stuff that we knew from day one would be here for a limited time only. The closer we’ve come to today, the more Mario related items will be delisted. From official merchandise leaving Nintendo Stores to the Super Mario show getting pulled from Netflix. It’s not even just Mario stuff. With the entire situation recapped, all of the important stuff listed and with everyone caught up, let’s get on to the answer to the first question: why Nintendo’s practice is anti-consumer.

Anti-consumerism, as defined by Wikipedia, is “concerned with the private actions of business corporations in pursuit of financial and economic goals at the expense of the public welfare, especially in matters of environmental protection, social stratification, and ethics in the governing of a society”. That’s quite a mouthful but in short, it means any business practice that’s hurtful to the consumer. In what way is this limited release strategy harmful to the consumer? That’s two-fold.
The first is quite simple: severely limiting the ability to buy these products in this way puts psychological pressure on consumers. If you’ve even been partially been paying attention to the videogame industry, and the entertainment industry as a whole really, you’re no doubt familiar with the FOMO, the Fear Of Missing Out. It’s (again, thanks to Wikipedia) “social anxiety stemming from the belief that others might be having fun while the person experiencing the anxiety is not present. It is characterized by a desire to stay continually connected with what others are doing”. It’s peer pressure, the old concept that when you saw a fellow classmate as a kid show off his awesome new bag of marbles you wanted one too. With the internet though, this has taken on never seen proportions. With how large social circles can now be, how easy it is to go online and see what’s ‘in’ and social pressures are much higher then they were, say, 10 years ago.
When it comes to such limited release strategies, companies are banking on two things. One: that this limited release will result in them getting their money now and two: FOMO. The gaming industry has shown increasingly disturbing trends when it comes to matters such as promoting and causing gambling addiction through the use of loot boxes, heavy monetization etc. In this environment implementing this type of limited release strategy is quite tasteless and makes it all even worse.
The second problem, business-wise, are the scalpers. Scalping, the practice in which a singular person buys the large stock of a product to sell it at a premium when the product is no longer available. Scalping is a problem that in the age of the internet is even a bigger problem than before. Some scalpers use automated bots to buy up the stock of online stores before anyone else can get their hands on them.
Alright, on to question two: what makes this situation any different from other limited release products? I mean, every physical product is a limited release. After all, the production of these products will stop someday. Well, the difference is the small window of availability and the hard deadline on it. Both of these things invite FOMO, peer pressure and scalping more than the ‘standard’ limited release strategy. Another factor is the type of product it concerns. This is where the Mario Game & Watch comes in. It’s much more of a niche product that has less mass-market appeal. Its effects are thus felt less.
Third and final question: can we expect Nintendo to pull this strategy again? That’s difficult to say at this point. It’s not a move I expected Nintendo to make in the first place. With that in mind, it could very well happen again. But not with just any product, that I’m fairly confident about. This strategy doesn’t work if they do it with just any game or product. If it’s not at least somewhat special, people won’t bite. People will quickly become exhausted with it and Nintendo will lose quite a bit of consumer trust.

Then there’s the little matter of how the limited release strategy has worked out. On the plus side, for Nintendo, Super Mario 3D All-Stars has been a hot seller. In its first week of release, Super Mario 3D All-Stars was the best-selling game in the UK and was the third-largest game launch of 2020. In Japan, the game sold over 210,000 physical copies within the first three days of its release. Those are some very good sales numbers and could push Nintendo to do it again.
What could push Nintendo in the opposite direction is the negative presst. Nintendo has always been a company that has put a lot of effort into building and maintaining consumer trust. This consumer trust has not been as good as of late though. Joy-Con drift and Nintendo’s response to it has been the thing that put the company in a bad light the most and has been a serious problem for many. Just look at the number of lawsuits about it that Nintendo is dealing with at the moment. The limited releases have been yet another thing that caused an uproar and lessened consumer trust. As such, Nintendo might be best for the company to not pull this strategy again for the time being and focus on building its consumers trust back up.
Finally, there’s the little thing of how the ‘limited number of copies’ turned out in practice. The entire upheaval during the first few weeks Super Mario 3D All-Stars was completely unnecessary. At launch it was very hard to get but this didn’t last long. By the time of Black Friday, you could buy the game everywhere. And that’s where the word ‘niche’ comes in once again. Super Mario 3D All-Stars is a game with mass-market appeal. Do you really think that Nintendo would shoot itself in the foot by limiting its availability? No! The very early shortages of the game were more because of FOMO and the fear that Nintendo might not restock the game after all. This trick wouldn’t work again because people now know that they’ll be able to get the game even if they miss out on it on release day.
With that, all of the points I wanted to make in regards to Nintendo’s Limited release strategy have been made. The practice isn’t good for the consumer as, aside from just being already a ‘dirty’ release strategy, it plays into the already existing problems of FOMO, peer pressure and scalping. With how Super Mario 3D All-Stars has the mass market appeal it makes this situation worse in a sense as it affects more people, which makes it different from other limited releases. However, as it is a mass-appeal game the ‘limited’ part of the game really is only because it’s available for a few months. Nintendo made sure that there were enough copies available and by that point, why make it a limited release, to begin with?
I hope that Nintendo won’t pull a release strategy like this in the future with, say, the Legend of Zelda’s 35th anniversary but Nintendo does what Nintendo does so that’s not a certainty. We can only wait, see and hope that it doesn’t happen again.
Article Gaming Mario Nintendo