How could Future State influence the direction of the DC Universe? 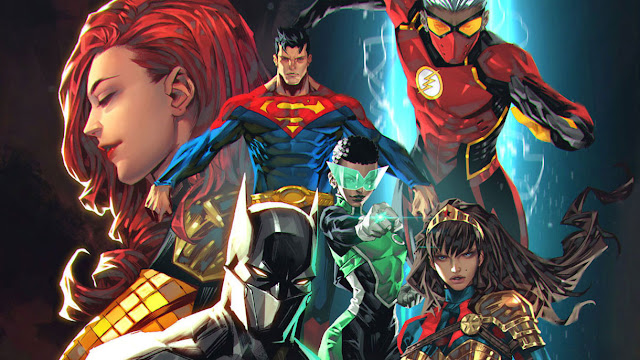 DC Future State is now well and over. Infinite Frontier #0, the ‘Rebirth one-shot’ equivalent is now out and the DC universe is back to its regularly scheduled programming. Well, not quite. Future State is over, but it’s far from gone. From the story that was featured in Infinite Frontier to what is already happening in the comics, it’s clear that DC intends to keep elements of Future State around. And that, my friends, is what I want to talk with you all about today. How Future State is/might influence the DC Universe in the near future. More specifically, I want to focus on the characters of Future State. As I said in my Future State overview, Let's Talk About how Future State: how good was it?, the event was more focused on introducing characters then it was on stories. OK, maybe I didn’t say it in those specific words but it was heavily implied.

With all of that out of the way, let’s dive in.

First, a very quick recap of Future State. After the events of Death Metal, the state of the DC Universe is in flux. The future has yet to be written in this new DC Omniverse and Future State shows how that future could potentially turn out. Or, as many Future State titles themselves put it: “From the ashes of Death Metal rises new life for the infinite Multiverse and glimpses into the possible unwritten worlds of tomorrow.” If you want to know more, I advise you to not only check out the article I linked to in the introduction, as well as ‘Let's Talk About DC's newest event: from 5G to Future State’. For now, this is all you have to know.

Alright with that established (once more) let’s skip straight to the end, to the point that we’re currently at. The Future State aftermath. As I stated before, Future State is hanging around for a while which it's doing in two forms. Characters introduced in the event will be sticking around while some stories will also sort off stick around. Let’s start with the latter so I can move on to the former. The one that I don’t have that much interest in and, quite honestly, kind of dread.

Multiple current titles have either plot elements that are clearly meant to lead up to the events of Future State or are just entirely marketed as Future State lead-ups. The main Batman book currently tells the origin of the Magistrate, the para-military organization that outlawed superheroes and rule Gotham with an iron fist. Teen Titans Academy has been marketed as a direct lead-up to Future State: Teen Titans. My problem with this is that those stories, the magistrate element and the entirety of the Titans ‘four horsemen of the Apocalypse thing’ are some of the least interesting story (elements) of Future State.

I found the Magistrate and the entire concept the least interesting thing about the Future State Batman books. I had numerous, smaller, problems with it. Some characters are badly written ‘that’s what the plot demands’ as well as the story being, generally speaking, rather depressing. In the case of Teen Titans, it was part, and the start, of the ‘Four Horsemen’ story-line. A story that ran throughout the Future State Teen Titans, The Flash, Shazam and Legion of Superheroes books. With those four titles, you immediately have the bottom of the barrel of the Future State event. It’s a bad story that is better left behind if you ask me. Instead, it seems that DC is intent on keeping it around. Yeah. Not looking forward to that. At all.

What I am looking forward to is the plethora of characters from Future State that are now carried over. I found the characters much more interesting then the story and quite a few of them showed real potential. The Yara Flor Wonder Woman immediately drew many people’s attention and the character did not disappoint. From here adventurous and humorous characterization that also has plenty of flaws that make here a fully-realized character. To her design and the heavy influence of Brazillian mythology that is not only very interesting but puts worth behind Yara’s ethnicity. She’s a breath of fresh air for the Wonder Woman mythos. Also: Future State: Wonder Woman was a very fun and enjoyable book so seeing Yara and that books creative team stick around makes me happy.

I also quite enjoyed the Next Batman: Jace Fox. While I had some troubles with his storyline, from the aforementioned elements to it constantly breaking my suspension of disbelief because, e.g., ‘why has none of the Robins taken over the Batman mantle’. I didn’t like the wider world the characters were placed in, but I do enjoy the character itself. Jace brings something different to the Batman mantle. Something that any of the Robins as a Batman couldn’t and I feel that’s worth exploring. But in what way?

And this, my dear readers, brings me to the crux of this article. To THE point I want to make and discuss. From what I’m currently seeing, DC comics seems to have taken the entirely wrong lesson from Future State. The strength of the event is the characters not the stories yet DC seems to lean more into the latter than into the former. Why do I say this? Well, because of the titles that DC has revealed for their new line-up, the direction of the stories shown in issues such as the Infinite Frontier one-shot. It seems that DC is working towards making Future State the status quo of the DC Universe in a year or two.

What’s my problem with this approach? I mean, we are getting more stories about these characters, no? Well, my problem with it is two-fold. The first is simply that I don’t like these stories, most of them have problems while a few of them are outright terrible. The second goes back all the way to the origins of Future State: 5G. The event started as yet another total-reboot of the DC universe. The current crop of heroes would be completely replaced by new characters that took over the mantle of Batman, Superman, Wonder Woman etc. That idea got scrapped for a multitude of reasons and salvaged into Future State. See Let's Talk About DC's newest event: from 5G to Future State once more for that entire story.

I, and many others, were thankful for this decision. It seemed like DC comics was going to make the mistake it made with the New 52 again, just worse. That throwing out nearly all of its characters and their stories again would cause such a whiplash from readers that it would doom the company. Not just the change in characters worries me if Future State becomes the status quo, but the entire tone as well. That the future of Future State is rather depressing and one I don’t think it’ll keep readers engaged for long. I, and many others I’ve noticed, already got tired of the depressing tone of Future State after a few short weeks. If they don’t change this tonal approach, which I fear they won’t because I feel DC thinks it was the stories that made Future State a relative success, then I think that’s another reason for people to stop reading the comics. With how DC seems to build up to the future shown in Future State, I’m worried that this will still happen.

So yeah, that’s a fear of mine. That DC will be nothing but Future State in a few years. I think that they should approach Future State not as a concrete roadmap to build-up to and follow but as an experiment. As something that they should pick and choose elements from while disregarding others. I think the way they’re going with the Yara Flor Wonder Woman is a good example of what they should do. She’s going to headline a new Wonder-Girl series, keeping the character around but not necessarily the atmosphere that she was introduced in. They should do stuff like that. Introduce the characters but adjust them so that they can fit within the current state of the DC universe. That they can exist outside of Future State.

I could be wrong in my fears. I hope that I’m wrong, but I can’t get this fear out of my head at the moment. We’ll just have to wait and see.