More of an update, than a upgrade. 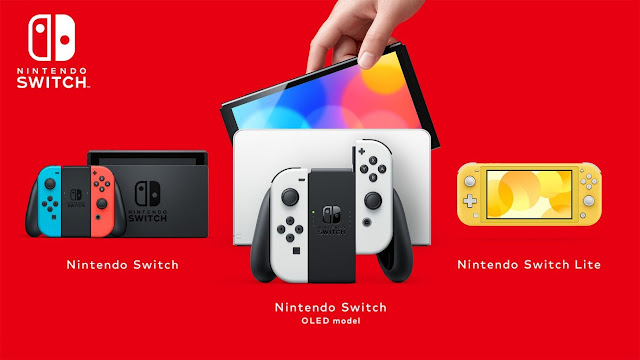 Imagine for a second, if you will, the following scenario. After a nerve-wracking job interview and a 4-hour commute to that job interview, I come back home and immediately start preparing dinner. Quickly scrolling through, I see what looks like a white Switch come by. I stop. I scroll back. I think it's someone's mock-up of the heavily rumoured Switch Pro and is about to close Twitter when I see the account that sends the tweet. Nintendo UK. It's not a mock-up. It's not yet another 'leak' and/or 'rumour'. It's official. A new Switch Model is real.

First came astonishment. Then came excitement and a hungry search for more information. Then came dread and finally, came satisfaction. I'm happy with the news of the Nintendo Switch OLED Model. Not for what the 'Switch OLED' is, but what it is not.

Rumours and speculation of a new model Switch, known as the 'Switch Pro', have been coming and going for years now. Ever since late 2018/early 2019 rumours about new Switch models started to appear. Those early rumours were about a handheld-only Switch and a more powerful Switch. The former was the Nintendo Switch Lite, while the latter could've been the 'Red-box' Switch, the one with a better battery but that was really up for debate.

For the next two years, the rumour about a more powerful Switch reared its head every couple of months. Fans kept speculating, industry insiders kept bringing it up and outlets kept reporting on it. Even I got in on the action a few months ago, when a very strong rumour (supported by many reliable gaming news outlets) did the rounds that said that the reveal of a new Switch could happen any day now. I wanted to have my opinions on the matter out before so I wrote them down.

At the time, the rumours were as follows: 4K compatibility, a stronger chips set aka processor, an OLED screen that may or may not be bigger and, this one came in later, a new kickstand. Looking at what the OLED Switch brings to the table, those last round or two of rumours were almost spot-on. The OLED Switch has, obviously, an OLED display that is (slightly) larger than the display of the original and Lite models and it has a better kickstand as well. If you want to know more details, I suggest you go to Nintendo's official website or check out Nintendolife's handy-dandy comparison chart but these are the broad strokes of what the OLED Switch has to offer.

A disappointment to many...

For many, the OLED Switch is a disappointment. People were hoping that a new model Switch would be more akin to the PS4 Pro and the Xbox One X. A mid-way upgrade that would boost the Switch, let it have more powerful games, for a year or two. That's the reason why everybody referred to it as the 'Switch Pro'. However, that's not what happened. The OLED Switch is very much in line with most Nintendo hardware revisions. The New 3DS and 2DS were more powerful, yes, but that's the exception to the rule. The New-Style Super NES was just a compact, more streamlined NES. The Nintendo DS Lite was slimmer, brighter, and lighter DS. They were improved consoles, certainly, but you can't really call the upgraded versions.

People were expecting more of a new model Switch instead of the usual. You can see this disappointment back in the responses. The trailer shadow-dropped to an astounding 'eh' and many polls I've seen (mostly on Twitter, but still) have around 50% of the people saying they're not planning on picking it up. Even a Nintendo employee has told fans to stick with the current model if they've got it. The OLED Switch is very much a way to extend the console's lifespan, get some QoL improvements in there and put the Switch back into the eye of the general populace. It's shiny and new, after all.

Why am I relieved then? Why am I not disappointed that this new Switch is an update, not an upgrade? For one very simple reason: it won't have exclusive games. If we had gotten a 'Switch Pro' that was had a better processor you'd bet there would be exclusive games for it. I don't like spending money needlessly and very much dreaded the scenario that a 400,- new Switch would come out and I would have to buy if I wanted to play X game(s) only two years or so before a new console would come out.

I know people have pointed to the New 3DS and its measly 3 exclusive titles but the Switch isn't the 3DS. The Switch has been a runaway success. The hardware is still outselling its competition more than it doesn't and its software keeps being a large part of them, especially in the UK. Putting their games on the Switch is a thousand times for alluring for 3rd-party developers than with the 3DS so you can be certain there will be plenty of exclusives.

Also: I've wanted white coloured Joy-Cons for years now and the OLED Switch finally gives it to me. Also-Also: the new Switch dock, including a built-in LAN port and better venting, is compatible with the original model. In that article about the 'Switch Pro' I wrote I added in one point of speculation of my own. An upgraded Switch dock that would be compatible with the original Switch and would give it some of those upgrades. Yes, what we're getting here is nowhere near as extensive as I speculated but I can't help but be proud of me predicting something 'correctly'.

The Nintendo Switch OLED model is a disappointment to many, though not for me. People were expecting an upgraded, more powerful, 'Switch Pro' and instead we got a sleeker Switch with a better and bigger screen. As this means that I won't have to dread missing out on any exclusive games and thus won't be pushed into a corner as a Switch owner, I'm happy with the OLED Switch. It isn’t perfect, but it's far from a bad revision in my mind and will give the Switch a nice little boost.