Running out of gas. 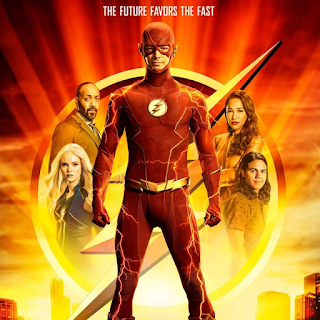 Let's just rip the band-aid off immediately: The Flash Season 7 is giving Season 5 a run for its money as the show's worst outing. Sure, the Covid-19 Pandemic has thrown quite a big wrench in the works but it goes far deeper than that. There was behind the scene trouble in-between seasons and there's one aspect of the show that really took a tumble and drags the entire season down something fierce. Even so, there are still things this season does well and there's some enjoyment to be had with it.

So, without further ado, let's dive in.

All right, perhaps a little more ado before we jump int Ever since Season 6, The Flash has divided its season up into parts. "Graphic Novels", as showrunner calls them. For convenience sake, I will divide the first half of this review up into these "Graphic Novels". I give the story setup, give some quick thoughts about each "Graphic Novel" before moving on and looking at the season as a whole.

Team Flash find themselves outmatched and running out of time in their fight against Eva McCulloch, the Mirror Monarch. She has taken control of both McCulloch industries and her late husband's criminal organization Black Hole in her bid to take control of Central City. Iris has been captured and is trapped within the Mirrorverse driving her slowly mad while the Speed Force that remains in Barry's system is fastly depleting. Can Team Flash stop her before it's too late?

Reflection and Lies is not a good start to the season, through no fault of its all to be fair. Season 6 was cut short due to the Covid-19 pandemic. Reflection and Lies, the first three episodes, are essentially the finale to season 6. A hodgepodge of already filmed footage, footage filmed with the Covid restrictions and reworked footage to explain Elongated Man's absence after actor Hartley Sawyer was fired. As such, these episodes are incoherent, a bit of a mess with an underwhelming conclusion to boot. The rest of the Mirror Master story seemed like it was doing things differently only to end like basically every big-bad story of The Flash ends these days.

After defeating Eva McCulloch, Iris escaping the Mirrorverse and Team Flash things seem to be back to normal. That is, until the Speed Force itself manifests in Barry's and Iris's loft. Turns out that when Team Flash re-created the Speed Force, they also 'gave birth' to three other forces of nature. The Still Force, the Sage Force and the Strength Force. It's now up to Team Flash to find these new Forces and bring an end to their attempts of killing the Speed Force.
God Complex is the absolute worst part of the season. There are just so many problems with it that I cannot believe that nobody went 'hang on for a minute when it was conceived. The problems with the story are plentiful and all made worse by the overall shortcomings of this season. The story is too weird, to 'out there', cringe and is outright creepy. NOT because it goes for a horror tone like the Bloodwork but because the insistence on these new Forces being Barry and Iris' 'children' is ten different kinds of creepy and uncomfortable.
In short: it's painful.

Basically, three consecutive filler episodes. That don't have an overarching story. And that's immediately the problem of this Graphic Novel. They are clearly filler episodes at a time when there are less than half of the season's episodes left. It seriously undercuts the following story arc, but more on that later. They are enjoyable, but don't serve the greater season in any way and could have, and should have, been cut. Except 'Good-Bye Vibrations', that is.

It's original cast-member Carlos Valdes 'finale' episode as Cisco so giving his exit an entire episode dedicated makes sense. It's also the season's best episode. Not just because it focuses on the Barry/Cisco/Caitlin dynamic but because it successfully channels the energy and quality of those early Flash episodes.

When an army of Godspeed clones attack Central City, it's up to Team Flash to protect the city while looking for the real Godspeed. Meanwhile, Barry and Iris are trying to start a family but the arrival of Godspeed is a looming shadow over this as he used to be their future daughter Nora's origin story bad-guy, it makes Barry especially worry about the future of his family.

The final 'Graphic Novel' is the best of the bunch. Sadly, it's only 4 episodes long which is an entire problem on its own. Because it is so short, the pacing is really rushed. There's not a lot of time for the story to build itself up before it has to be concluded again. The millage on Godspeed will also vary. He's pretty far removed from the Godspeed of the comics and, honestly, feel like he ran straight out of Power Rangers with the over the top nature, portrayed by a stuntman in a completely closed suit etc. The final battle is also rather over the top. Pretty sure that you've seen it floating around on the internet already.

If you look past these issues though, you'll find that these episodes are pretty entertaining. They don't fall into the season's many problems as much as the rest did and the guest-stars make it worth your while.

Two aspects that are problematic throughout the entire season, no matter the 'Graphic Novel'. The writing and the size of the cast. The former is really the cause of this season's bad quality. The writing this season is very messy, bland and cringe. A lot of people point towards showrunner Eric Wallace for the decline in quality, but that's doesn't hold up when you remember that Wallace became showrunner in season 6. A season that was received rather well and felt like it was returning the show to its hay-day.

No, what the problem seems to be to me is what happened to Community in season 4. Creator and Showrunner Dan Harmon got fired after season 3. The staff that remained behind did their best to replicate Harmon's style and keep Community, well, Community. Even with their efforts, the show felt more like a water-downed version trying to imitate what made it work but failing to understand why it worked exactly. The Flash season 7 feels the same way. To many people, both in front and behind the camera, are gone. The people that are left to their best, sure, but the show still feels like a diluted version of what it once made it so great. The spark isn't there anymore. This leads to the overall tone feeling off and much more cringe and flat out boring moments then before.

The second problem is the size of the cast. It’s too large. Characters like Joe West were an integral part of the series early on but the show as out grown their presence. With Barry and the rest maturing, his role as the mature mentor figure has been filled by other characters. The season still tries to justify his presence by giving him a storyline of his own, investigating the clearly amoral cop Kristen Kramer but said storyline is just outright terrible. It doesn't do justice to the character while Kramer herself is not deserving of the 'redemption' the show pushes for her.

And then there are the characters that leave the show. Instead of using this opportunity to give more time to the remaining cast members, redefine their roles, the season simply introduces replacements. Replacements that don't feel like full-fledged characters, fail to leave their mark. The season is even unable to commit to these characters leaving as they are brought back again soon after their leave in moments that feel superfluous at best.

That has been a lot of criticism but this season still does some things well. Even if the cast is given bad lines and, at times, the bad direction they still do the best they can. The performances are good, from their body language to their facial game. The production values remain good on the whole, except the writing of course. You can see the effect the pandemic has had on production but they deal with it amicably.

Season 7 of The Flash is a season I would skip. More specifically, everything before 'Interlude I', before 'Good-Bye Vibrations', are not worth your time. The conclusion of the Mirror Master story is underwhelming, to say the least. The Forces arc is just painful and has very few entertaining moments in it. Most of the things that happen in it, even the B-plots, get undone or are made irrelevant later on. From 'Good-Bye Vibrations' onward though, the season becomes more enjoyable. The problems are still there, but they are less pronounced and the show is more entertaining overall. I'd give those episodes a shot but that's about it for this season.

Hoping season 8, which has a high chance to be the final season, will be better than this. The season has no cliffhanger, but the finale does have a story element that could (and should) be followed upon. Not only would it make for a very fitting end to the show (should season 8 indeed be the end) but it would be a very interesting story to see play out. A reverse of season 1, you could say.