Ranking all the Zelda games that I've played. 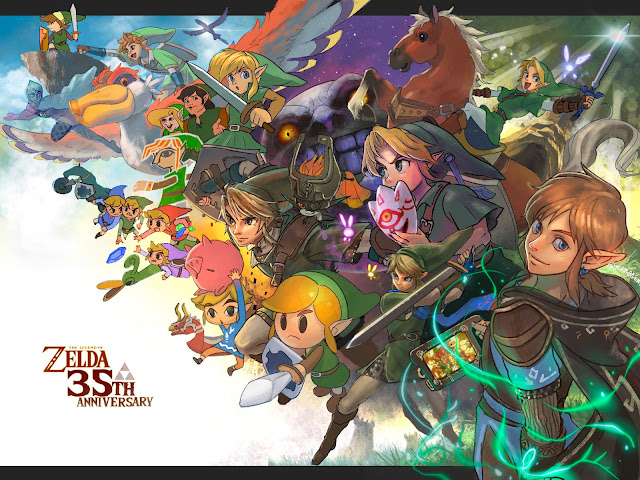 While my first experience with the Zelda franchise wasn't a particularly pleasant one, over the years, I've played almost a dozen Zelda titles. From the 2D to the 3D. From the spin-offs to the crossovers. I still have more in my collection, the Oracle games and the Nintendo Switch Online titles specifically. In honour of the franchise's 35th Anniversary, I'm going to rank them all from my least favourite to my most favourite. I would like to stretch that this list in no way, shape or form reflects the quality of these games. It's only a reflection of how much I enjoyed each game and nothing more.
Without further ado, let's dive in!

11. The Legend of Zelda: Phantom Hourglass

The first Zelda game I ever played was Phantom Hourglass on the Nintendo DS R4 card I had as a kid. I had seen a review of the game in a magazine I had so when I saw it installed on that new, gifted R4 card I figured I give it a try. It wasn't a very pleasant experience. I can't remember the exact reason(s) (the controls? not knowing what to do?) but it left a very bad taste in my mouth. I put it down and didn't touch it, or any Zelda game, for around 7 years. Perhaps I'll secure myself a copy of this game someday and give it another shot now that I've played so many more Zelda games but for now, it's at the bottom of my list.

Tri Force Heroes isn't a bad game but just one that isn't for me. A game that's all about the franchise's puzzle-solving during the Holidays? Sign me up! If I was aware though how heavily it relied on Multiplayer, I think I wouldn't have bothered with the game. I'm more of a single-player guy, only playing Multiplayer couch style with my friends. It can be played alone and I did enjoy the opening hours, but it's not really meant to be played Single player. It isn't properly balanced for it. I ended up getting stuck in chapter 3 and didn't feel like playing it again after that. Perhaps someday I'll restart it, knock the one game of my backlog that started the darn thing, but that day won't be any time soon.

09. Cadence of Hyrule: Crypt of the NecroDancer Ft. The Legend of Zelda

I feel that a fair few will be 'shocked' to see this indie developed spin-off/crossover title so low on the list. I put it here though for a simple reason: I just couldn't get into the rhythm-based gameplay. I tried my best, but I just couldn't get the hang of it. The many deaths and randomly generated layouts frustrated me to no end. I ended up switching to 'Fixed-Beat' mode where the enemies only move when you do too. It broke the game's difficulty and play length in half but it did finally make me enjoy the experience and allowed me to finish it. The pixel graphics are amazing and the soundtrack is stunning but this is a one-and-done experience for me.

08. The Legend of Zelda: Skyward Sword

The most recent 3D Zelda is also my least favourite. Some might see that as undermining my recent review of the game in which I stated that, if you look beyond its frustrating issues such as the iffy motion controls, it´s a perfectly fine Zelda game. I also said that it was a very formulaic Zelda game with only a few added bells and whistles and that´s why it´s at #8. I´ve gone through these motions many times over already. Compared to all the other 3D Zelda´s, I find that there´s not enough it does on its own to make it stand apart from the crowd enough other than those motion controls. If perhaps, I had played this game before the other 3D Zelda game it would've stood out more to me but as it stands, it's my least favourite of the 3D Zelda games.

Yes, you read that right. A spin-off/crossover ranks higher than a big 3D Zelda game? It sure does and the reason for that is a direct result of my criticism with Skyward Sword. Because of its wildly different gameplay and even because of the problems it has, it's a much more memorable and overall enjoyable experience to me. The Wii original of Skyward Sword is a commitment with how big and, well, slow it is. It's not a game you can easily pick up when you feel like it. Age of Calamity meanwhile is a game perfect to just pick up and play. I can see myself go back to Age of Calamity more than Skyward Sword.

This and the Zelda following it are a toss-up for me. They're very similar yet very different at the same time. In my mind, these two games form an inseparable duology that stand on equal footing. But this is a ranking and letting them share a number would be a cop-out so I had to make a hard call here.

Before Breath of the Wild entered the scene, Ocarina of Time was regarded as the best Zelda game and even the best video game period. It might not shine as bright as that anymore, but it's still a stellar title. The story is an epic journey across a wonderful fantasy land across both space and time and good dungeon design. It sports interesting characters that, unlike even later Zelda games, give some of them noteworthy and unique things to do. It has its problems, like a Hyrule that's vast but empty and has some pacing issues but in the end, it's still an amazing title. The 3DS version has textures & models are updated and it has some spiffy QoL updates that, in my opinion, makes it the superior version even with the sacrifices it makes for portability.

The other part of the Duology is, of course, Majora's Mask. It's one of the few times in the franchise in which a title is a sequel to another. That features the same Link as another game, not just another incarnation of the hero. It uses the same engine, models, assets and such as Ocarina of Time. Yet, it's very unique. From its setup, the 3 day system, the long and interconnected side-quests to the mask system. It's, without a doubt, the darkest Zelda game in tone. The world you travel to, Termina, is facing imminent destruction after all. This uniqueness is what puts it above Ocarina of Time for me. While the 3-day system can be daunting and the overall tone is, perhaps, too depressing once you really dig into it, Majora's Mask is a Zelda game that we'd never seen and won't see again any time soon.

04. The Legend of Zelda: Link's Awakening

It's time for some 2D Zelda action, no? It's where the franchise got its start after all. Link's Awakening is the most recent 2D Zelda game, a remake of the Gameboy (Colour) original. It's a very enjoyable, pleasant title. It’s top-down Zelda at its finest with enjoyable characters and a twist that’ll definitely make you think. It's a Zelda game that you can just pick and play while relaxing and making you feel comfortable. And, something I've said a few times already, one that's more unique in its setting and story in Koholint Island. It places lower than the other 2D Zelda for two reasons. While the toy-like graphic style grew on me over time it's still not my favourite. For 60,-, it's also just too pricey for the amount of content it offers.

03. The Legend of Zelda: A Link Between Worlds

After that bad experience with Phantom Hourglass, I didn't touch a Zelda game for around 7 years. Even when I touched a Zelda game again, it was more a situation of convenience than anything else. When going to the store to buy a Nintendo 3DS partially funded by the upcoming Christmas, the store had 'A Link Between Worlds' gold 3DS XL model on sale. It was nice and gold and after some pushing from my parents (I initially wanted the Pokémon Y bundle but they had already bought that game earlier as an extra surprise Christmas present), it was the 3DS I bought. And to my own surprise, I fell in love with the pack-in game. It took me a while to get through, had to look up a walkthrough here and there but it gripped me. I was on the edge of my seat during the final boss and immediately wanted more after beating him. Bought Ocarina of Time 3D not long after and the rest, as they say, is history.

02. The Legend of Zelda: Twilight Princess

At number 2 is Twilight Princess. It's far from a perfect game and I have my gripes with such as the visual style but at the end of the day, Twilight Princess is the Zelda game that inhabits my brain the most. Whenever I think about Zelda's pre-Breath of the Wild days my mind instantly goes to Twilight Princess. When I think about Zelda music, my mind goes to Twilight Princess's soundtrack. That, combined with the history I have with this game, places it so high on the list. It was the first-ever experience I had with Zelda, though didn't realize it at the time. I saw my cousin play the game on his GameCube, switching back and forth from Link to Wolf Link. It was interesting to little me. Learning that this game I still vividly remember from that day was a Zelda title after A Link Between World was such a pleasant surprise. Getting the game for a birthday (new old stock no less) was magical.

01. The Legend of Zelda: Breath of the Wild

And at number 1 is surprise surprise, Breath of the Wild. Up until the release of Mario Kart 8 Deluxe, and even a few months after that honestly, my Switch was a Breath of the Wild machine. I did not mind in the slightest. From my birthday in April to August of that year, Breath of the Wild was THE game I played and I savoured it. I took a clockwise approach to defeating the Divine Beasts, starting with Vah Naboris and the Gerudo but I didn't rush anything. I took my time with it, explored it to my heart's content. I completed the 120 shrines before even tackling Calamity Ganon. That's how much I enjoyed just exploring the world, just being in it. While I would've liked better dungeons and the game frustratingly has no crafting system Breath of the Wild was a gaming experience I hadn't had before or since.

And that's it folks! Those were all the Zelda games I played ranked based on my enjoyment and the impact they left on me. Well, at the moment that is. I'm far from done playing Zelda games so this list might chance over time. New games enter the list or replays might change my views. It's only natural that the rankings might chance of time no?