Filling in the gaps. 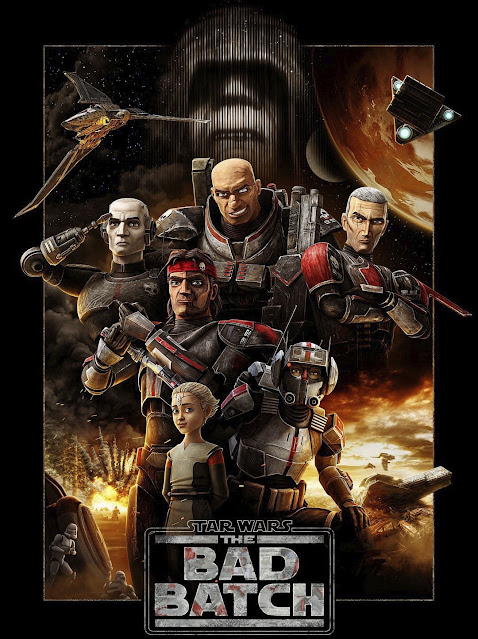 Some of you might recall that a few months back, I wrote a review on the 90-minute movie-like premiere of the newest Stars Wars animated series. The Bad Batch, a sequel/spin-off of The Clone Wars season 7 starring the titular Bad Batch. A group of genetically deviant clones whose mutations grant them abilities such as super strength or superintelligence. Think along the lines of X-Men and Suicide Squad. Said premiere was pretty darn strong and I've kept with the series ever since then because of it. I never saw it trend on Twitter or really heard people talking about the show after the premiere, making me think that the show wasn't doing so well but Disney announced season 2. Guess that makes the Bad Batch a silent hit, something that's becoming increasingly rare these days especially when it comes to streaming shows.
So, what is it that makes this show a silent hit? Is it the Star Wars branding? The connection and behind the scene taken from The Clone Wars and Rebels? Or is there more to it?
Let's dive in!

Star Wars the Bad Batch picks up during the time of Order 66. After taking down a battalion of Separatists Droids, the Bad Batch start marching forward to the frontline with Padawan Caleb at the moment Order 66 is given. Due to their mutations, the Bad Batch´s inhibitor chips not working quite right and after seeing the oppression and cruelty of the empire first hand most of the Bad Batch, except for marksman Crosshair, defect. They're now on the run from the empire serving as mercenaries. All the while, they are protecting and training Omega, a young female Clone who has tremendous value to the Kaminoans, the ones responsible for the entire Clone army.

A thought that popped into my head early on in the season was that the Bad Batch didn´t feel like a streaming show. Just as there´s a difference between movies that go to theatres and once made for TV, there is a palpable difference between ´classic´ shows and streaming shows. And no, the fact that the Bad Batch is animated doesn´t change anything. Shows like Invincible, Harley Quinn and She-Ra and the Princesses of Power are a testament to that. Now that the season is over, I can confidently say that the Bad Batch is indeed a show that very much feels like a show made for a TV network. Nothing inherently wrong with that, but it does bring some stuff with it and can explain why it's a silent hit.

Take the story for instance. It's good and very enjoyable, if not as ambitious as I would've liked. It's where that 'made for TV' thing comes in. When I take a look at critically acclaimed animated shows of this calibre such as The Clone Wars, Adventure Time or Steven Universe I've noticed a pattern. It starts out pretty much as any other kids show.

It's only a few seasons in that it starts to dive deep into the themes that have slowly but surely come to the surface. The longer it's on TV, the more successful it becomes and once it has found an audience, the shows become bolder. After the Clone Wars season 7 (a Disney+ exclusive as well), I would've thought that the Bad Batch would start out bolder. But no, not really. I'd say that over half of the 16 episodes don't contribute to the larger whole, don't move the greater narrative forward. There are a lot of 'one and dones' and 'one-off adventures' throughout that are fun, but have low stakes, don't really contribute to the overall seasonal goal and thus also risks audiences not coming back each week.

It's this exact reason why I think the show is more of a silent hit more than anything else. I feel that enough people checked it out week to week to warrant a second season but not enough to trend. Disney ordering season 2 before season 1 even dropped is also a possibility but I'd rather keep the glass half full. It's a shame, really, as the season is really good. I don't think that there's even a single bad episode in the season. Sure, you have those that are more forgettable or are a bit weird but none of them is terrible. Each and every episode is, at the bare minimum, entertaining.

And this way of building the season isn't all bad. The Bad Batch is the perfect show for kids and newcomers because its 'adventure of the week' style and lower stakes make it easy to enjoy and get into. That isn't to say that there's nothing here for the Star Wars veteran. Far from it, even. There is a ton of interconnectivity and references here. From locations to characters such as Rex and Fennec Shand. Admittedly, this is also a problem for the show. At times, the Bad Batch themselves take a backseat to it all.

With the weak overall arc of the show, it sometimes felt like episodes of the Bad Batch were solely there to establish things for other Star Wars properties. The episode that shows the origins of Hera, a main character of Rebels, barely has the Bad Batch character in it. They're only there for, like, two minutes. Using these shows to fill in the gaps and retroactively establish characters is part of the course with Star Wars at this point and can make subpar episodes more interesting for the viewer but it gets too much here at times.

I would be doing a disservice to everyone if I didn't mention the voice acting. 5 of 6 of the main characters alongside many side and background characters are voiced by the same actor, Dee Bradley Baker. And yeah, he does an excellent job of it. He manages to give each member of the Bad Batch a distinctive voice that fits their personality to the point that I thought that they weren't voiced by Baker. The rest of the voice actors put in a good performance as well, making the entire show a well-acted one.

The animation of the show is very well done as well. It’s largely the same animation style as (the latter half of) The Clone Wars and Rebels. You can clearly see that the combination of experience with this animation style from the development team and the increase in technology. It´s very fluid, with well-animated facial expressions, eyes that aren´t soulless and with nice attention to detail. The background is well done and with the many different planets, the Bad Batch travels to across the season, very diverse.

Star Wars the Bad Batch is a good and entertaining show. While feeling more like a show made for TV than for streaming and having a weak overall arc it's a very well-crafted series. It's a very enjoyable one, with good and interesting characters, animation that looks good and is very fluid and with good voice acting. Even if it didn't have any significant social media presence, don't let that stop you, as it's worth a watch.

Perhaps that's the season is now out in full and with Star Wars as a whole on the rise again viewership of the show will go up and once season 2 rolls around next year, it will have a much larger social media presence.