Saving the world starts at home. 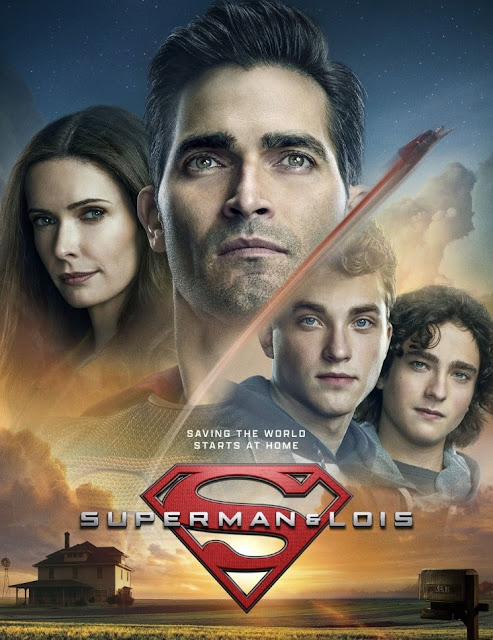 Superman & Lois is the newest series in the CW's and DC's shared TV superhero universe, the Arrowverse. The Arroweverse sadly has been on the decline for a while now. There has been a missed season here and there before the big Crisis on Infinite Earths but since the crossover, the shows just haven't been that great. While Batwoman season 2 is an improvement of the first, it's still far from excellent and The Flash season 7 might just be the worst outing of the series. In these dark days for the Arrowverse, true to form for its principal character, Superman & Lois swoops in to save the day. It's a breath of fresh air for these shows, not just in production but also for the character of Superman.
Let's dive in.

Superman & Lois follow you guessed it, Superman & Lois. These versions of the character are a bit older. They've been married for something close to 20 years and have two children, the twins Jonathan and Jordan. Even for the Man of Steel and the world's greatest reporter, life is still life. After the Daily Planet gets bough by Billionaire and self-made mogul Morgan Edge Clark gets laid off, with his mother dying of old-age around the same time. After discovering that Jordan has inherited his father's powers, the family decides to stay in Smallville for a fresh start. However, this comes with its own trials and tribulations. Smallville, just like many small towns, is in the middle of a people and business exodus putting the people on edge. Edge promises to revitalize the town but clearly having a hidden agenda. Not only that but 'The Stranger', a man in a battle suit capable of hurting Superman, is making things difficult as well.

As you can read above, a lot is going on in Superman & Lois. From Superman's battle with the stranger to Lois' investigation into Morgan Edge, Jordan's blossoming powers, Jonathan's trouble adjusting to Smallville etc. To the shows credit, while I certainly think some storylines are better than others, it manages to juggle each storyline without dropping the ball. It never feels like each story is truly a separate adventure, but simply an extension of the episode's overall story. It actually reminds me of the Dutch crime series 'Flikken Maastricht'. That show follows both a pair of detectives and uniformed officers on a separate case each episode that, by the end, turn out to be connected to each other.

Another strong point of the story is its grounded approach and tone as well as its character work. You could say that 'keeping it grounded' is this show's mantra. Being a superhero show and the trappings that come with it seems very much secondary, almost an afterthought.

For example, being 'Superman' doesn't define Clark. Sure, he goes to save people and fight supervillains but he spends just as much time outside of the suit. Practically all of his struggles don't come from Superman but from Clark Kent. From him being a husband and a parent. This approach isn't just refreshing and makes his problems relatable but fixes an issue that has plagued Superman for years, even decades. How to keep a Superman story suspenseful while its titular character can do so much and is invulnerable. The answer? By making this struggle come from Clark and not Superman. It works out very well if I do say so myself.

It's just not Tyler Hoechlin's, very well performed, Clark Kent/Superman but the rest of the characters as well. Eliza Tulloch wouldn't be my first, second or third choice for Lois Lane but she's actually a very good Lois Lane. She might not quite look the part but that's about the only aspect in which she isn't Lois Lane. Jordan Elsass as Jonathan and Alex Garfinn's are very good as Jonathan and Jordan Kent. I love the subtlety of Jonathan's mixed feelings regarding Jordan getting the powers and not him, the portrayal of Jordan's social anxiety and especially the strong brotherhood the two have.

The supporting cast does a good job as well. Wolé Parks completely sells the Stranger and his journey throughout the season even if I don't agree with the direction the writers chose for his character. I didn't really care for Erik Valdez' Kyle Cushing, he came off as a big jerk, but he has some interesting stuff to do in the back half of the season which wouldn't have worked so well if it weren't for Valdez' performance. It's only Emmanuelle Chriqui's Lana Lang who I feel is a miss cast. Not because of her acting chops, those are good, but because she doesn't quite bring the energy or the sass to the role I want. She's not really the Lana Lane from the comics.

Really, I only have a handful of actual 'big' critiques. One is the overall flow of the season. The season is 15 episodes long, shorter than most Arrowverse shows (a positive in my book) but I feel it could've easily been an episode or two shorter without really impacting much. I think it would've also been better for the show's momentum as well as the season fails to hold on to it throughout. Part of that is because of the CW putting the show on weird Hiatuses and partly because I do feel the season was just a bit too long.

I'm also not fond of the villains of the series. You could divide the season into two halves, each with its own story and big-bad. The first half focuses on the Stranger, while the second is all Morgan Edge. I've got issues with both. For the Stranger, I don't like how the show backpaddled on his true identity. The cliffhanger of the first episode suggests that he's a Luthor but this is retconned around the midseason finale. And yes, it is a retcon. One of the showrunners it was I believe admitted in an interview that he was originally meant to be a Luthor but they liked Wolé Parks and his performance so much that they wanted to make the character heroic and it does show. Nothing against Parks or the character he became but I think the story would've been stronger if he had stayed a Luthor. They still could've given him a redemption story. It would've even been stronger I feel, him being a Luthor and all.


Morgan Edge has two problems for me. First, he's just not that interesting to me. An, admittedly charming, English mogul that has the facade of a good doer but in actuality is morally corrupt, out for his own benefit, has ulterior motives and doesn't shy away from killing whoever stands in his way. Been there, done that.

The second is his connection to Superman. It fits with the themes of family that the season has but I don't like how the show changes the Superman mythology to do so. It's not a 'they ruined it!' scenario but I still felt it was unnecessary. I feel like they could've achieved the same effect on this change, but it is what it is.

Superman & Lois might air on the CW and be a (flimsy) part of the Arrowverse but it's very clearly different in one way. Thanks to the production being co-funded by HBO Max it has much higher production values than its siblings. It has better GCI more outside and on-location shots, higher grade camera equipment etc. Even the on-set atmosphere is more in line with higher-end productions if I interpret David Ramsey, John Diggle of Arrow and a director on the show, correctly. This all leads to this show simply looking and feeling like it's of a higher quality. More in line with streaming shows than network television. Very neat and another boon for the show.

Superman & Lois is a very good and enjoyable show. It's well-produced, well-acted, pretty faithful to the source material and with a grounded style of storytelling that opens it up to a wide range of people. I have some issues with it, like the overall flow of the season and the villains, but nothing is perfect. For a first outing, Superman & Lois is surprisingly strong.

It's definitely worth checking out.