Why the Virtual console should really come to the Switch

It's, admittedly, unlikely to happen at this point but the virtual console on Switch could be the boost it needs. 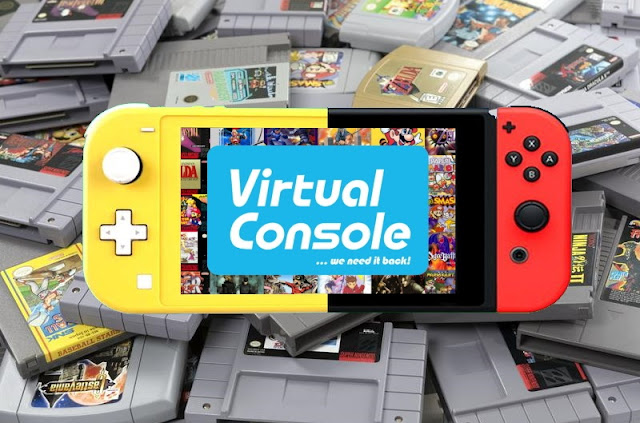 The time between a new console reveal and release is always a magical one. The potential for the soon to be gaming console always seems endless. What whistles and bells will it have, for example? One of those whistles and bells people were speculating about was the Virtual Console. Will it come to Switch and be the one all, be all stop for Nintendo's vast gaming library? Well, no. Before the Switch even launched, Nintendo announced Nintendo Switch Online. As part of this paid online service, you would also get access to a selection of NES titles in an subscription like fashion. A replacement for the Virtual Console. This is how it has been for the Switch, a flat rate of 20 bones for access to over 100 NES & SNES titles. Some would say it's better but judging by the like to dislike ratio of recent games that come to the service and the recent Metroid boom suggests otherwise.

Let's dive in and see how Virtual Console on Switch has a lot of merit to it.

The history of the Virtual Console; The Wii

Before we dig into the meat of this article, why the Virtual Console (VC) should make a return and how it could be handled, here's a brief history of it so that you can get up to speed. When Nintendo revealed their newest console during E3 2005 the Nintendo Wii under its development codename the 'Nintendo Revolution' they also revealed the system would be backwards compatible. Not only would the system be able to play GameCube discs but it would also have the ability to play games from older consoles as well. The following year at E3 2006 it detailed what it meant with the latter.

Through the Nintendo Wii Eshop you'd be able to buy games from the NES, SNES, N64 and even Sega system games under the 'Virtual Console' banner at standardized prices. All NES cost you 500 ´Wii Points' aka 5,- for example. These games ran on the system through emulation which worked out well. The games looked pretty good and played like the originals, controller notwithstanding. Nintendo also added some bells and whistles to the games in a quality of life manner such as suspended save files and save states on games that didn't have any saving system before. The emulation did create some problems like reduced frame rate some glitches here and there but even so, the quality of the games was good.

Starting to decline; the 3DS & the Wii U

If there´s one problem with the 3DS VC though, it's the limitations. Gameboy and GBC games were nice and NES and SNES (only for the new 3DS) games came to the 3DS as well later on, just as some Sega console games but what people really wanted was Gameboy Advance support. This, however, never happened. Some GBA games did find their way to the 3DS but only as part of the 3DS ambassador program. When Nintendo slashed the price of the 3DS from 250,- to 170,- after only a few months it gave early adopters around 20 retro games for free as an apology of sorts.

GBA games were a part of this deal but never came to the 3DS proper even after heavy demand. When asked about it, Nintendo would respond that bringing them to the 3DS would be 'too difficult'. The way I see things because, GBA games ran on the system itself and not through emulation, each game had to be optimized individually. I don´t think Nintendo thought that the investment for the optimization would be worth it in the end. That the profit margin would either be too slim or the games too expensive and thus lead to lower sales.

It took a few months before the VC came to the Wii U, and even then it was only NES and SNES titles. Nothing new, except the interface of the VC framework. Neat, but pretty useless to Wii owners as they could transfer their Virtual Console library to the Wii U and play them using the console's 'Wii-mode'. You could upgrade them to the Wii U version, get those interface improvements, but only at a fee which many deemed wasn't worth it.

More games of different platforms did come to the Wii U, like GBA for some odd reason, but by this point (think 2014/2015) the VC had lost considerable steam with players. The novelty had worn off and it just wasn't that exciting to many anymore. However, sometimes you only realize how great something was when it's gone. You only miss it when it's gone and with the Virtual Console, I very much feel that this is the case.

Like I said in the opening, instead of the Virtual Console the Nintendo Switch has Nintendo Switch online (NSO). For 20 bones a year you get access to Nintendo's online services (multiplayer, cloud saves and more) and both the NES and SNES online apps. From the outset, this looked like an improvement. You get access to all of these games for a fraction of the price, alongside the other Online features of course. However, the subscription model has its limitations and the cracks have been showing themselves more and more.

If we leave the fact that most people find that the value isn't quite there for Nintendo Switch Online, the current library of games is far from perfect. Barebones, even. After almost 3 years, NES and SNES games are the only ones on the service. No N64 or GameCube, not even Gameboy games. It's frustrating that comparatively to Nintendo's large library, only a handful of NES and SNES games are available on the Switch. This is something you can see back in the reveal trailers of the new batch of NSO titles. It went from a like/dislike ratio 12k/1.3k in December to 9.2k/6.6k in February to 3.7k/16k in July. Yikes and sad. It could be the change for overlooked gems to get their 2nd due but instead, they are buried fans wrath because they're not Mother/Earthbound.

People want Gameboy, N64 and GameCube games. Those are the games that are, at the moment, getting more and considering that the big nostalgia boom surrounding the NES and SNES has died down and have been readily available for years now. From the VC's of the Wii, Wii U and 3DS to even the NES and SNES mini consoles.

N64 and GameCube games are not and you can see that back in the current prices of these games. Those have been going up while the prices for NES and SNES have remained stable for quite a while now. Those are the games the long0time, older fans (the ones who are the most interested in VC and the SNES and NES apps) are interested in. And it's not just these older fans, the once hunting down these (overpriced) older games that drive the demand for legacy games. It's the newer and the more casual crowd as well.

After the reveal of Metroid Dread during the last E3, the series blew up. It was, unexpectedly for more ways than one, the big Nintendo game of E3. Many people wanted to learn more about the series and this lead to a run on any (well, perhaps not Other M) Metroid games. Metroid games became more difficult to find and more expensive to boot while retail stores old stock of the most recent Metroid game, Samus Returns, sold out after warming the shelves for years. This also included Metroid Fusion and Metroid Zero Mission for the GBA topping the digital Wii U sales charts.

Just imagine if the VC was on the Switch, how many people and how profitable that would've been for Nintendo. The Wii U only sold 13,56 million units compared to the Switch' (at the time of this writing) 89,04 million units. That's a lot of potential money for Nintendo by not having these games available on the Switch. If I were an investor, I would bring this point up to them and that is the entire reason I wanted to write this article.

It doesn't even have to come at the expense. Nintendo can improve NSO by adding benefits such as reduction on VC games when you have NSO and offer N64, GameCube as 'on trial' games, something Nintendo already doing with certain Switch games. The Virtual Console could enrich NSO instead of taking away from it, as many think. As Nintendo itself seems to think whose comments regarding NSO seem to hint at the company feeling that NSO has enough value. That adding more games to it, without raising the price, would be 'too many games'.

While a subscription format for Nintendo´s retro/legacy content that comes 'free' with the Switch online the way it's handled now is limiting and overly frustrating. NES and SNES games are the only ones on the service, which are certainly not bad games, but the boom for these games has passed. They've become readily available in a digital format while N64 and game cube games, whose nostalgia boom is happening right now, aren't. Bringing back the Virtual Console would get these games in front of consumers much easier and Nintendo to profit from gaming booms such as the aforementioned Metroid one.