Teenage superhero-ing at its finest. 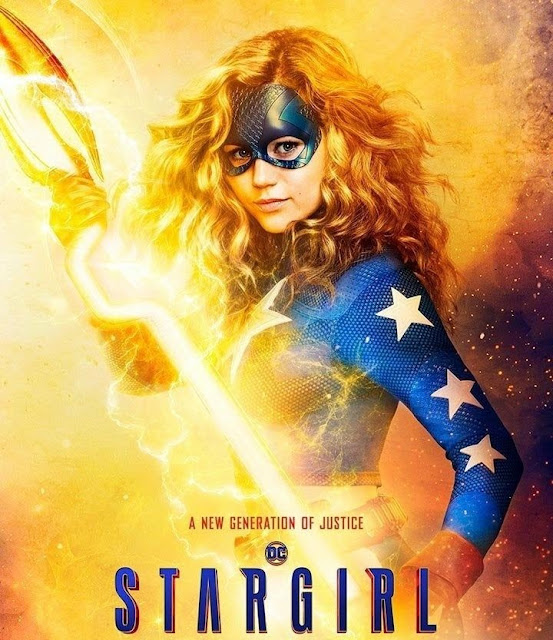 Now that I've access to the CW website thanks to the lovely application that is a VPN I have the opportunity to take a look at shows that I missed up until now. Enter: DC's Stargirl. This series was made for the now-defunct DC Universe streaming service that also aired on The CW a day after each episode became available on streaming. Was this move done to increase the eyes on DC Universe or did the producers see the writing on the wall? Who knows but the result is that the 1st Season of Stargirl can now be watched for free on the CW website. Season 2 will start airing on the network on August 10th and a third season has also been ordered. So, what has Stargirl Season 1 to offer that it has gotten a third season order before the 2nd has even aired?
Let's dive in.

10 years before the start of the show the superhero team the Justice Society of America (the JSA) are attacked by their evil counterpart, the Injustice Society of America (the ISA). Pat Dugan AKA Stripesy, the sidekick to Starman, arrives to find most of his friends dead with Starman dying in his arms. Before he fully leaves this mortal coil, Starman entrusts Pat with the cosmic staff (the source of his powers) until a worthy successor can be found.

Picking up in the present day, teenager Courtney Whitmore moves from LA to the country town Blue Valley, Nebraska with her mother and new stepfather and stepbrother, Pat and Mike Dugan. After a bad day at her new school, Courtney stumbles upon the Cosmic Staff which reacts to her presence. After using the staff to get revenge on a bully alerting both Pat and ISA member Brainwave.

Let's get this out of the way first: Stargirl is a very good show. It's a show with a lot of heart, positivity and some impressively good life lessons focused on (non-traditional) family. That's what makes writing this review a tad difficult. I enjoyed the series so much that the critical part of my brain pretty much turned itself off during chunks. But I'm going to do my best regardless! The 'standard' CW criticisms might not apply here but it stumbles here or there and but in the grand scheme of things, the issues are few and far in between.

Perhaps we should start with those 'standard' CW criticisms that don't apply here, shall we? Because it started life as a streaming show for DC Universe, the show has a higher budget, more time dedicated to all stages of its production and movie-level talent. Naturally, the show very much feels like a streaming show as a result. The production values of the show are stellar. There's more CGI than usual and said CGI also look much better. Even if Courtney herself doesn't put on the Stargirl suit every single episode, there is an action sequence in each episode.

And what cool fight sequences they are! The heavily leans into Courtney´s background as a star athlete for some very impressive fight sequences that combine athletic moves and the Mjolnir like comics staff. Lots of dynamic flips here. Courtney, Stargirl, is far from the only one with good fight sequences. Both the JSA and the ISA having a diverse set of characters with powers that give the fights a wide range. From CGI heavy fests that look better than expected though can still be too stiff, to more dirty fistfights.

Then there's the cast. As I already alluded to the cast is a mixture of film, TV and newer talent, all of who bring in good to excellent performances. You have big level talent here like Pat Wilson, brother of Owen Wilson, Amy Smart from Shameless and Joel McHale from Community in a brief, but pivotal, spot. Most of the rest of the cast like Brec Bassinger as Courtney/Stargirl and Anjelika Washington as Beth/Doctor Mid-Nite II doesn't have that same 'oomf' but they certainly bring their A-game. The likeability of these characters can almost completely be attributed to their actors.

The cast does suffer from a big problem though: it's too big. Over 10 actors are listed as 'main characters' with numerous supportive and guest actors as well. That's a lot and the show indeed struggles to give each character their due. There are only 13 episodes, in the season after all. Courtney, Pat and the rest of the family get more than enough time to develop but characters such as Yolanda, Rick and the majority of the ISA members don't. In the case of the former two, they do get a character journey and some development but it pales in comparison to Courtney (who is, to be fair, the main character here) and don't feel cohesive. With the ISA, many of its members are just there until they're not. They fill a space and that's about it.

The overarching story also falls flat in my opinion. The show is strongest when focusing on the characters. the smaller stories, and the Dugan/Whitmore family. There are some strong stories here like Courtney's first becoming Stargirl, the Brainwave and Brainwave Jr. Journey, Courtney's real dad etc. The thread that binds all of these stories is JSA Vs ISA but this conflict never reaches the height of the opening (which is also a prime example of this show's excellent world-building by the way). A result of the only Icicle and Brainwave truly feeling like fleshed-out and dangerous characters, though Sportsmaster and Tigress are at the very least menacing and entertaining as well.

Stargirl season 1 is, again, a very good superhero show. It has good acting, writing, production values and acting. It has a lot of heart, positivity and some impressively good life lessons focused on friends and family. If it can focus itself a bit more in season 2, keep the cast lower and offer a stronger villain story, then it could very well be the best DC show of the year.