Why I dislike DC´s current direction

DC comics hasn´t been doing so hot and the way they´re attempting to get back on top isn´t really agreeing with me. 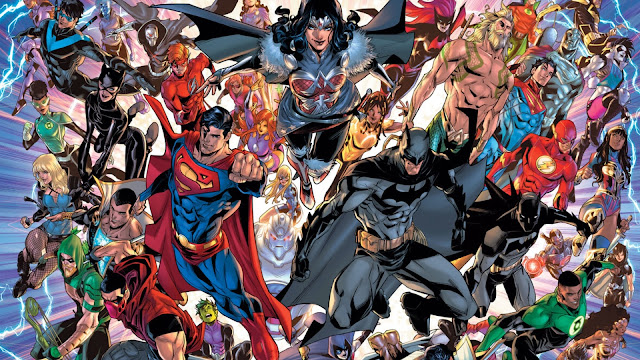 If you´ve been paying attention to DC Comics as a company (dive a little deeper into it beyond just reading their comic books) you'll know that they're not in the greatest shape. And haven't been for a while. The New 52 started off strong but quickly fell off both critically and commercially. Any attempts to rejuvenate the line, like Rebirth, have only managed a temporary boost. There have been many behind the scene shakeups as well like the firing of Dan DiDio and the retooling of 5G into Future State. And unlike Marvel, it doesn't have the most successful movie franchise or a company that has more money than God to support it.
In short DC Comics is on very thin ice. They are attempting to rejuvenate the line once more which they are doing in a way, they do it by taking a direction. A direction I dislike and I feel opens them up to more problems and isn't any different from what they've done before. Doing my research for this article, however, I think that I've found the reason for DC doing some of the things they're doing and it has everything to do with copyright laws and the public domain.

So a very quick recap to get this show up to speed. Future State, originally known as 5G (more on that in a previous post of mine) was meant to be a New 52 situation of sorts. The current line of books would come to an end an entirely new DC Universe would emerge. Practically all of the big characters would be aged up and removed from their roles. Bruce Wayne would no longer be Batman, Clark Kent would no longer be Superman etc. Instead, these iconic mantles would be held by younger and/or new characters such as Jonathan Kent as Superman and Yara Flor as Wonder Woman.

There, was, however, reportedly I must add, some serious opposition to these plans by staff and writers alike. When co-publisher Dan DiDio left the company after a decade in the position, reportedly after getting fired, 5G left with him. The work that had already been done was retooled and reworked into Future State. A 2-month event with by and large the same premise that filled the gap between Dark Knights: Death Metal and DC getting everything together behind the scenes. DC had been undergoing a restructuring as well, mind you.

That was the end of that. Or so I thought. It has become quite clear that DC is still going forward with their original 'new DC universe' plan. It's just that instead of it happening all at once they are gradually working up to it over a year or so. And that's exactly why I don't enjoy DC Comics nearly as much anymore.

The depressing future of Future State

When the event was going on, I did enjoy Future State even if it had its problems The future that was depicted was depressing and bleak and the overall writing was bad. It was very much the characters, together with some stories and concepts that were really good, that made me enjoy it the event was only 'meh meh'. It's this bleakness and overall depressing tone that really got me happy that the event was only temporary. Again, you can read an older post to see all of my thoughts.

Future State felt very much like a test run. For DC to see which characters and concepts could be further explored. The event was a sales success and characters such as Yara Flor were resonating with fans. My personal favourite option would've been to make it an alternate universe and give it its own imprint ala Marvel's Ultimate line. With how Death Metal ended with the Multiverse back in place and DC editorial said that they would be more flexible with continuity.

However, DC has instead gone the direction I feared they would. Titles such as Teen Titans Academy, Green Lantern Superman: Son of Kal-El are clearly building up to what we saw in Future State. A lot of it felt very much out of character or even out of the universe for DC. Renee Montoya, for example, read nothing like herself at all. Very much have the thought that the roles were written first and then DC editorial thought to themselves 'let's drop some already existing characters in these roles'. That it didn't make sense, that the characterization was wrong, it seemingly didn't matter. I had a similar problem with the Jace Fox Batman. I liked him but him being Batman didn't make much sense to me.

Marvel tried it already and failed

Another problem is the rapid rate at which these iconic characters are cycled out. Jonathan Kent is the new Superman, Bruce Wayne will no longer be Batman and even leave Gotham entirely once the Batman even Fear State ends later this year. Those are only 2 iconic characters leaving their roles at the moment but I'm still concerned about this apparent drive to cycle out-there characters.

For one, they are DC comics 2 most popular characters so the change in mantle will have a big influence on pop culture and the perception of the general populace. Jonathan's first outing as Superman has already gone back for a 2nd printing which many see as Jonathan Kent Superman as 'working'. However, the new Superman would've always sold well initially simply because of the change in identity and the big market push. I wouldn't call it a success until more issues of the new series are out and we can get a better grip on the sales numbers, the critical consensus and Jonathans place in pop culture. If Tim Drake's coming out has shown anything is that the general audience doesn't understand the difference between the original Dick Grayson Robin and the slew of Robin's that succeeded him. Jonathan needs to be able to make that distinction if he wants to succeed. The same goes for the Jace Fox Batman and any other new heroes.

What also worries me is that Marvel has pulled a similar tactic before. And failed. During All New All Different Marvel, Marvel NOW 2.0 and more Marvel cycled out many of its iconic characters. Sam Wilson became Captain America, Laura Kinney became Wolverine etc. While characters such as Sam Wilson have grown in popularity, the MCU even used this storyline after Chris Evans retired from the role, these changes didn't last long and there was a reason for it. These books stopped selling. Just like Superman Son of Kal El, while they started out very strong, the readership dropped by big. There were even reports that retailers got into a fight with Marvel staff at ComicCon 2017 because the books wouldn't sell because of the changes. A similar thing could happen here if DC isn't careful. They have to make sure that they don't cycle out too many characters at once and perhaps use books such as Detective Comics and Action Comics to keep telling new Bruce Wayne and Clark Kent stories.

Looking a bit deeper into it all, I might have found a reason why DC has been working on giving these mantles to new(er) characters beyond their attempt to 'refresh' for a new, younger audience. The copyright on Superman and Batman are set to expire in about a decade. This means that Superman and Batman will enter the public domain in the not too distant future. This doesn't, however, mean that starting in 2032 everyone can start publishing their own Superman stories. It's a bit more complicated than that.

When the Copyright on Superman expires in 2032 it only expires on the original comic. On Action Comics #1. Elements to the Superman mythos, such as flight, Lex Luthor, Lois Lane and the new standard red/yellow S shield won't be included. Anyone who would want to publish a Superman story can only use the elements of the character present within that issue. They would have to wait until a few years down the line, when the comics in which those elements are introduced, that they can use those elements.

Plus, the trademarks won't expire. Trademarks, which focus on marketability, keeps others from using the name 'Superman', 'Man of Steel' and the general look of the character in marketing materials. People could, in theory, create a brand new Superman story of their own and publish it but they couldn't use the Superman name, look on the cover and has to make sure that there would be no mistaking that the product wasn't associated with DC Comics.

So yeah, Superman and Batman entering the public domain won't be an apocalypse of DC comics but it's still going to be quite the headache for the company. However, all of this applies to the original versions of the characters. If DC created a new version of these characters then they wouldn't have to deal with all of this. Their copyright would reset. They wouldn't even have to deal with the original creator's rights and royalties due to how creative rights have changed since the early 20th century.

Those are all the reasons I'm not too keen on DC comics at the moment. The way towards the future of Future State casts a big shadow over many stories that make them difficult to really enjoy for me. The cycling out characters could also prove problematic for the company if these newer versions don't strike a chord with fans though they will circumvent the copyright and public domain issues of the originals.

Let's see how DC keeps themselves from falling into their own pitfalls as well as those of Marvel.