A new trailer has dropped online, so let's discuss it! 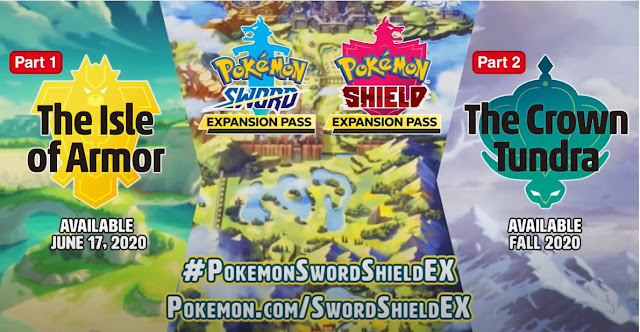 So earlier today, June 2nd, Game Freak dropped a new trailer for the Pokémon Sword & Shield expansion pass: The Isle of Armor & the Crown Tundra. This trailer not only gave us a concrete release date for the Isle of Armor, June 17th, but also some new information on things we already knew alongside some brand new footage. I'd like to give my thoughts about all of the new things revealed, while also doing somewhat of an analysis on the trailer. There are some things shown that make me wonder and might hint at some things still to come!

Let's start off with the same thing that the trailer starts with: the official, full reveal of Galarian Slowbro. Galarian Slowbro was confirmed to exist in the expansion pass announcement trailer way back in January, but aside from some blurry shots of its limbs we didn't know how it looked, let alone what its typing was. I have to be honest here and tell you that when I saw Galarian Slowbro for the first time, I was disappointed. I've seen multiple pieces of fan-art floating around online and two designs caught my eye in particular. One that was based on the very blurry sketch of Galarian Slowbro and the new character Avery in which it was wearing an apron, a design I really liked. The other one reincorporated the Shellder into the design, but instead of being on its tail, it had clamped itself around Galarian Slowbro's left arm. I didn't really like this design, as I thought it looked kind of dumb but as it turns out this design was right on the money.

That was disappointing to me, but the more I re-watched the trailer and saw Galarian Slowbro in action, the better it started to look to me. It's typing, Poison/Psychic is exactly what I suspected and was hoping for and its unique move Shell Side Arm sounds very interesting as well. So yeah, not the biggest fan of its design, but it has already grown on me and the other aspects of the Pokémon are interesting enough to me that I will definitely give it a try.

After the Galarian Slowbro reveal, we then move on to some more footage showing exactly what I had expected; an overview of the Isle of Armor. Brief shots of Mustard, Avery and Klara are shown alongside the Dojo, a mysterious machine resembling a Cramorant and the Isle of Armor itself. We're also given a much better look at the Gigantamax forms of Urshifu, Blastoise & Venusaur. Nothing we didn't know already but getting to see it all in motion and with more detail is appreciated. There's also a quick shot in here of a trainer facing the player with a Bulbasaur & Squirtle, so that seems to be the way you're given access to Gigantamax Venusaur & Blastoise.

Galarian Birds and The Crown Tundra

I figured that the trailer would focus solely on the Isle of Armor since that's the part of the expansion that will be released first. I guess Game Freak had other ideas because around half of the 3-minute trailer is focused on the Crown Tundra and it's where I got truly excited. We are once again given a better look at some new characters and locale (which look absolutely stunning by the way), but the real meat is with the legendary Pokémon. We're shown a brief but very cool cutscene of the birds that looked very much like the legendary birds from Kanto duking it out in front of a large, beautiful tree. Just like everyone suspected, these Pokémon are indeed the Galarian forms of Articuno, Zapdos & Moltres and we're finally given their typing.

Galarian Articuno is Psychic/Flying, Galarian Zapdos is Fighting/Flying and Galarian Moltres is Dark/Flying, not the typing people had thought they'd be. Many fans, me included, had thought that they would remain Ice, Electric and Fire respectively with their secondary Flying-type the one that would be changed to Psychic, Fighting and Dark. Thinking about their typing for a few minutes though, I do think I can see why they chose to do it like this. What is it that you think of when you hear the Legendary birds? That they're Ice, Electric and Fire. Their Flying-type feels trivial, just there because they're all birds. If they had chosen to keep their primary typing I feel that the originals would have been completely overshadowed. By changing the typing that most people remember them by, the originals still get to keep this part of their identity to themselves. I was just as surprised and disappointed as everybody else with their typing, but I can understand why they've chosen to switch out their primary typing and I feel it's better this way.

Their typing also results in this little fun-fact: due to their typing, Zapdos always had the edge over its siblings. Its Electric-type moves would always hit with super-effective damage because of their shared Flying-type but because Galarian Zapdos is part Fighting the opposite is true here. Neat.

We also got more details on the two new Regi's, which are confirmed as the Electric-type Regieleki and the Dragon-type Regidrago. Not a surprise really, one is literally made out of electricity while the other has the skull of a dragon attached to its body. It was predicated and it makes sense, but I still think Regidark would have fit better than Regidragon. The Regi's all represent three different Golems made out of three different materials, Ice, Stone and Metal.

What is less obvious is that each of the Regi also represents a different era of our beloved planet Earth. Regice represents the Ice-Age, Regirock the Stone-Age and Registeel the Iron-Age. Regieleki and Regidrago seemingly fit into this pattern as well. Regieleki represents the current Modern-Age, where we humans discovered and heavily rely on electricity while Regidrago seems to be the representative of the Dark-Age. I think the Dark-type would have fit better because well, it is literally called the Dark-Age, but it is the same period the Medieval age and dragons are mostly associated with this period. The Galar region is also based on England, which has a rich history of dragon myths and folklore so it ties into the theme of the games as well. It works, but I still would have preferred Regidark.

So now we come to the 'analysis' part of this post. Only glanced during the trailer, the information revealed by Game Freak alongside the trailer tells us about the existence of "Max Soup". If I understand it correctly, you can use it to give Pokémon access to its Gigantamax form if they hadn't already. We knew that there would be a way for the starters to get their (new) Gigantamax forms in the Isle of Armor but it seems that they aren't the only ones. While this is definitely very nice, my Shiny Grimmsnarl is just delighted by this news, I do fear that this will 'devalue' the Gigantamax Pokémon. Right now you can only get them through Max-Raid battles so catching them feels like a true reward. They're harder to obtain so rarer and more valuable to trade for and if you get your hand on a Shiny one the feeling is especially magical.

I fear that with "Max Soup" getting a Gigantamax Pokémon through a Max Raid battle, or through trading, isn't very special anymore. Why would you go through all the trouble if you could just get them through the use of an item? I do hope that there will be some sort of restriction in place, maybe give it out a reward for in some sort of battle event in the dojo after completing the Isle of Armor? You'd keep the rarity of the Gigantamax Pokémon intact that way.

Something else that I noticed, which is very speculative, is that we see a shot of both Klara and Avery sending out a Dynamax Pokémon but while they show of Avery with Galarian Slowbro we don't see what Klara sends out. Many people have pointed out that the bow of Klara's head resembles the wings of a Dustox, but in a different colour and with 'attachments'. Fans have seen this as a hint that a Galarian Dustox is on its way.

I can't help but think that this moment alludes to it, or another yet to be revealed Galarian form. In the original January trailer, Avery and Galarian Slowbro appeared together. This trailer seems to confirm it as his signature Pokémon so that begs the question: what will Klara's signature Pokémon be? Is it Galarian Dustox? It could always be Galarian Slowking, though as they've said that it will become available in the Crown Tundra I doubt it or she might also have a Galarian Slowbro (it is part Poison after all), that would be a disappointing cop-out. I don't know, but I'd like a Galarian Dustox very much.

So those are my thoughts about the trailer. The first part of the expansion will be out in just under 2 weeks, so we don't have to wait that long before we get confirmation on some of these things, but's it's fun to speculate and give my thoughts regardless.