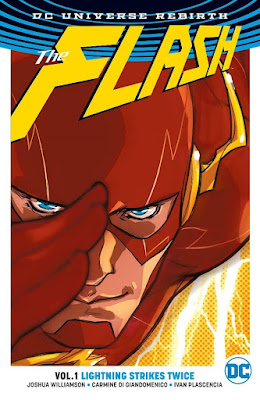 In the last two seasons of The Flash TV series the character of Godspeed shown up a few times. Godspeed is a relatively new character to the Flash mythos, debuting in 2016 during DC's Rebirth line of books. He's become quite popular since then, being without a doubt the most well-known 'new' Flash character. I can't say I'm that much of a fan of Godspeed myself though. I read the first few issues of the Rebirth run on The Flash so I got to read about his introduction while it was happening, but it didn't really stick with me. With the last episode that he appeared in hinting at a bigger Godspeed story to come, I thought it was about time to take a look at the initial Godspeed story arc in the comics, see his origin story and maybe get a better sense of why Godspeed has stuck in people's minds while other Flash characters have not.

We're going to be covering 8 issues here, skipping the Rebirth one-shot for convenience sake (and because I have different plans for that one) so without further ado let's dig in with given the briefest of plot summaries.

While running around the city as The Flash, Barry witnesses a Speed-Force storm hitting Central City, gifting random citizens with speedster powers. One of the individuals given powers is Det. August Heart, a friend of Barry at the Police Department. Others affected are Wallace West, cousin to Barry's love-interest Iris West, whose already budding speedster powers are given a boost, S.T.A.R. Labs scientist Meena Dhawan and a young Chinese-American girl named Avery. It's up to Barry to find and mentor everyone granted speedster powers, stop the terrorist organization responsible for the Speed-Force storm and figure out the real identity of the new villain Godspeed before he kills all of the speed given citizens.

After reading these 8 issues I've made a few observations that I'm going to use as the backbone for this Review. The biggest one: the story is very, very predictable and not just because I've read the story once already. I don't think I'm spoiling anything when I tell you that August Heart and Godspeed are one and the same. August was already a suspect, introducing a new supporting character that has ties the hero who's also the new big-bad is a comic book trope after all. Even with the curve-balls, the story throws at you it was never enough to convince me that August wasn't Godspeed. The more the story peels back the layers on August, the clearer it becomes that he is Godspeed and what his reasons are for being so.

This predictability isn't limited to Godspeed alone, it extends to the entire story. I got a sense of where the story was going for each of the characters early on and it was pretty spot-on for all of them. Here's the thing though. Even though it wasn't hard at all for me to see where it was all leading to, the book didn't bore me at all. I kept on reading because the execution of it all, the way the story is being told and the characters that are involved, kept me invested. Here's an example for you: I could just feel the tension building between August and Barry and I felt the darkness in August heart. Even though Meena and Wally only really interact once, I still felt the bond they build up with each other. I knew where it's all leading to, yes, but the journey towards that end is just so enjoyable that it didn't matter for me. I was invested and having fun nonetheless.

In regards to the artwork: I don't like it. Never have, never will. It's not bad outright, but the books main artist, Carmine Di Giandomenico, just has a style that I find hard to look at. His work has a lot of bright colours, sharp angles with a lot of things going on in the same panel. The combination of all of these factors, especially in fight sequences or when a speedsters lighting comes into play is that it all looks very messy and blurry. I find it hard to make out what's happening in a lot of panels and some are downright painful for my eyes to concentrate on for too long. I do appreciate the work the artist puts into the book though, not the least of which is because he is definitely creative, but also because there are some neat call-backs and references worked into the art. I can think of at least two panels that mirror (well-known) moments from Barry's history of the Flash and I can appreciate it.

Another observation: Godspeed has been the only thing that the TV show has adapted from this current run. Blackhole and his founder and leader Joseph Carver, introduced in these books, have been a threat for team Flash during season 6. So while it was fun for me to see them pop-up here, Carver and his organisation aren't really the greatest villains in this story. Joseph himself is pretty much a one-note character and Blackhole fails to really be a high enough threat against the Flash. They're underwhelming is what I'm trying to say. Blackhole will come back later in the run though, so they might become a better, worthwhile threat there, but in this story arc, they're definitely more of a secondary, 'in-between' thing to give the Flash something to do while Godspeed lurks in the background.

The final thing I have to say about these 8 issues is about their length. The story-arc is 8 issues long and that is on the long side of things. Its 2 issues longer then what I'm used to with these kinds of arcs being and that was initially a bit daunting to me. On the flip-side though, I feel that if the story had been shorter it would have been more condensed, given the story less time to build up the relations between the characters. The strong investment that the book manages would not have been as strong in that case and with the story beats so predictable, it would have hurt the book. It's a matter of taste I feel: do you prefer your stories to be a bit shorter and faster-paced or do you prefer the longer, more of a slow-burn approach? All I can say here: prepare for a longer reading sitting on this one.

To wrap it all up: are these 8 issues, is this trade, worth reading? I'd say yes. They've got some issues, the predictability of the story and the artwork prime amongst them, but those aren't enough to make it a bad read. The issues are well written, manages to keep you invested and there's fun to be had. To come back to Godspeed one final time: do I see why he's become so popular with fans? Well, I think it's because the story did such a good job of getting the reader invested, combined with his coolness factor, that had kept him in peoples mind. Appearing later storylines might have also helped, but I can't really say anything about that.

So yeah, pick this trade up if you're interested. I don't think you'll be disappointed.