Last week I took a look at my personal favourite story-arc of Marvels Champions and after finishing that review I was in the mood for some more teenage superheroes. So, let's jump to the competition and see what they're cooking up on that front at the moment, shall we? Most people nowadays will most likely think of the animated TV show when they hear the name Young Justice, but I can tell you now, that's very much a different beast than the comic book version. Young Justice is, for those of you who don't know, a superhero team made up of teenagers introduced in the '90s.

Compared to the Teen Titans, DC's most prominent young superhero team, Young Justice put more focus on a general sense of fun and was 'weirder', zanier. What I read of that initial Young Justice run, the book felt more like a comedy yet not without drama and even some really dark and kind off messed up moments (I'm looking at you Secret & Harm)! This tone, this combination of fun and excitement mixed with some real drama and situations relatable to teens is what, in my opinion, made the original Young Justice series so beloved by its readers. I think a combination of this love for the series, combined with DC trying to promote itself to a younger audience and lighten up the tone of its books and with the popularity and recognition of the name through the TV show is what made them decide to bring the team back under its new 'Wonder Comics' imprint.

So, how does this new incarnation of the team stack up to its original? Has Brian Michael Bendis successfully captured that original Young Justice spirit or are these book just a cheap imitation? Let's find out by taking a look at the team's first story together, collected in Young Justice volume 1, fittingly titled: Gemworld.

The first issue starts in Gemworld, a magical world parallel to that of the DC earth. A mysterious figure approaches his master and tells him that he has figured out what is happening to their world. Every time earth has gone through a crisis (Crisis on Infinite Earths, Final Crisis etc) Gemworld has been hurt by it as well, simply put: they're collateral damage. Deeming it humanities fault, his masters orders him to travel to earth and bring back their champion, Superman, to answer for these crimes. In Metropolis the members of what will soon be the newest incarnation of Young Justice are slowly crossing paths. When warriors of Gemworld invade, our heroes successfully force them to retreat but get sucked into the portal as well as stranding them in Gemworld with no way back. Not everything is doom and gloom though, as Robin encounters Amethyst, princess and hero of Gemworld while Impulse runs into the long-lost Superboy. The other 5 issues of in the story arc deal with our splintered group of heroes coming back together and try to save Gemworld from the evil that is destroying it and getting back home.

As I said in the introduction, what made Young Justice stand out in comparison to its cousin the Teen Titans was its tone. The combination of sheer fun and comedy with legitimate teenage drama and angst. Judging from these 6 issues, Brian Michael Bendis at the very least nails half of that. The book is so much fun to read and has so much of it stuffed inside of its pages that I've no idea how the people behind the book managed it all. It definitely has the same energy that the original book had though I also think that's as much its greatest boon as its bane, for two reasons.

The first one is that the high energy and fast pacing can tire the reader out. There's just so much going on at times, like in that debut issue, that I had some trouble following along with it all and started to feel 'reading-tired', that feeling that you've read so much you can't get yourself to focus on it anymore. I think that this chaotic feel was partially the intention and when these books first came this wasn't a problem. You had to wait an entire month before the next issue came out, but when you try to read all 6 issues in one sitting like I did you're going to feel at least somewhat tired near the end, I guarantee you.

The second reason? The book's humour seriously undercuts its own drama. What I mean by that is simple: it follows up nearly every dramatic, serious and/or tense moment with some joke or gag that diffuses the situation immediately. This works maybe once or twice, but these issues do this same trick so many times that I never really felt the character were ever in any real danger. I never sat near the edge of my seat because every time I was on the verge of doing so the book threw some humour in my face and the tension was gone faster than Impulse can run. The humour of the book isn't bad on its own though. The banter is strong and a lot of fun, there are some clear jokes sprinkled throughout, a visual-gag here and there and it fits the tone it's going for. I'd say that the vast majority of these jokes land though I do feel they rely on pop-culture a little too much and Impulse's comedic presence could have definitely been turned down a few notches. Other than that, the humour is strong.

Something that these issues have in common with that other piece of Brian Michael Bendis work we took a look at recently, Action Comics #1022, is the strength of the dialogue. Once again Bendis manages to write dialogue that is easy to follow, gives each character their own voice and is filled with good banter. Reading the interaction between the characters is a joy, even the bad guys are given their own personality that makes an otherwise forgettable and unremarkable band of baddies at least fun to read about. If I'd need to say something more critical about the writing is that, just like with Action Comics #1022, there is a little too much text for my liking but I feel it's not as bad this time around.

The artwork is not too shabby either. You notice when reading the issue that the work was split between multiple different artists. Each brings their own little flavour to the mix and I'd say that none of them does a bad job here. Sure, one is better in the faces while the other is better at posing, one is more smooth with curves and lines while the other is more angular but none of them is actively bad and the switch between artist never felt jarring.

This last one is no doubt due to the framing device of the story, which I quite like as well. The first issue starts off in the thick of things, the characters and you as the reader are thrown in this chaotic situation without much to go on, yet. Once the second issue starts the story gives you a little breathing room by introducing 'flashbacks'. It shows you what each of the characters has been up to before Gemworld attacked earth. Not only does this provide some answers on how a character ended up here and/or smooths out some continuity hiccups but also give you a chance to get to know these characters a little better. This is by no means a new way of storytelling, it has been done many times before, but I got to say that I find it particularly effective here.

In regards to the artwork, the artist for the main story seems to be the same, or at the very least it appears so, and it's in the flashbacks where the other artists come in. This way the book makes the change in art much more manageable for the reader, it would be much more jarring if such a change would happen mid-fight for example, but also makes it clear that we're reading a flashback while simultaneously underscoring the differences between the characters and how some are, quite literally, from completely different worlds. Well played Young Justice, well played.

So how did Brian Michael Bendis's first Young Justice story, the relaunch of the team, turn out? Pretty darn good. The book manages to stay true to the tone, the spirit, of the original while simultaneously crafting a story and characters out for its own. The writing is strong, filled with lots of good banter and fleshed-out characters supported with a variety of strong artists. The book falters in the tension department, the humour seriously undercuts said tension and the villains are one-dimensional at best but that's not enough to hold these issues down.

All in all, these 6 issues is a strong return to form for the comic version of Young Justice and I highly recommend that you give this first volume ago. 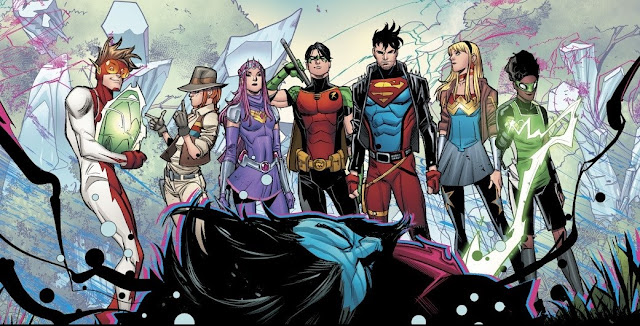