Review: Champions: Warriors of the Weird

The Champions is currently my favourite superhero team, not even the Avengers can tip them in my mind, and I try to read as many of the book associated with the team and its characters as I can. Even though they are my favourite superhero team, looking back at my output so far I haven't really talked about them. Well, if you want to change something there's no better time than the present, so let's dig into some Champions related material shall we!

The three issues that we're going to look at here today I've not chosen at random. They are the last three issues of Jim Zub's run on the book before a (mandatory) relaunch and form a single story arc: Warriors of the Weird. These 3 issues are my favourite Champions comics so far. Not only does it tie up some loose ends of the run through a very well implemented character development, but its premise is also very fun which makes reading this issue a delight for me. So, before I give away everything in the opening paragraph let's start this Review with the set-up of the book's story.

The story opens with the Champions trying their best to locate Nova & Wasp. They were pulled inside a portal during a fight the team had with Man-Thing in issue 24. After Snowguard consults the spirit that gave her powers, they manage to open a portal themselves and enter it to find their friends and things go immediately south. When Riri wakes up, she finds herself alone in a forest with her armour changed to resemble that of a knight, chain mail and all. It's not long before she is attacked by a group of humanoid rats wearing thieves clothes. She has trouble dealing with them until the timely arrival of Spider-Man. To her shock though, Miles doesn't remember being Spider-Man or anything from the outside world. Weird World, the realm where the Champions are teleported to, has essentially assimilated him and the rest of the Champions within its narrative and only Riri, known here as the legendary knight Lady Iron Heart, knows the truth. With no other choice, it's up to Lady Iron Heart to find her friends, convince them to work together and lead them to victory to save Weird World from the evil that has invaded it.

To start things off with: these three issues are a lot of fun. They just have an underlying tone of excitement to them that, I think, has everything to do with the book's writer, Jim Zub. Zub has stated that he wrote this storyline as a bit of an homage to another passion of his, D&D. This passion is what results in this underlying tone. He had a lot of fun writing these issues and it shows. From the nod and references sprinkled throughout to the role each of the Champions fills and their backstories, it's all done with a lot of passion. Even if you aren't familiar with D&D (like me) the fantasy setting is still easy to understand for everybody so you won't find yourself getting lost in it. T

he fantasy setting isn't just a gimmick here but is neatly woven within the narrative. Every Champion has a place in this story-arc, but Iron Heart and Nova are very clearly the focus here. If you strip the story down to its core, forget the fantasy elements the superpowers etc. the book is essentially about one thing: two teenagers overcoming a recent trauma and/or adversity. Iron Heart was almost killed by Thanos during a space mission and is dealing with some PTSD as a result of that. Nova has lost the helmet that gave him his powers and is questioning his place in life. 'If I'm not Nova, who am I then?' It's this focus on the characters that make the story so great and where the fantasy setting finds its purpose other than just being these issues selling point. By placing them in this fantasy world, both Iron Heart and Nova find themselves in a situation where they can't run from their problems anymore. By placing them inside this fantasy world, a place where they are out of their element, they are forced to face their demons if they and the Champions are to survive.

With that out of the way, let's move on to the artwork. It's good, not only in the usual departments like the poses and conveying the fight sequences, but it's especially good at conveying the world. Each and every Champion has been given a fantasy makeover, which I have to assume the artist had a big hand in, and just like all of the other D&D/fantasy aspects they are a blast. These new versions of the characters mix the D&D inspiration very well with their original superhero personas and they all look very cool and interesting to look at. Not every design is a win, I definitely think that Ms. Marvels 'Mystic Marvel' persona doesn't really work, but you can't put the effort at fault here.

Not just the characters, but also the Weird World itself wouldn't work (as well) if not for the art. Some of the faces or poses do admittedly look weird or even a little uncanny at times, but those are really the only bad things you can say about the art.

Something else that I want to mention, something that is very neat, are the covers. The primary cover for each issue features the Champions as their fantasy personas, which is already cool to look at on its own, but when you line them all up next to each other they form one big wall of art, a diorama of sorts. With a touch like this, I get the feeling Zub passion for these issues oozed through to the rest of the creative team as well.

I've been praising the books a lot up until now, but where they don't perform so well is definitely in the pacing, which feels a bit off throughout the entire arc. There are some moments which feel drawn out, like one of the fight sequences, while others go by a bit too fast. Not every character get the same amount of attention, Wasp in particularly draws the short end of the stick here, while others like Brawn do get a hefty amount of time on the page but this doesn't really lead anywhere. This was time better spent giving the other Champions. There's a side-plot here, a bit of a cliffhanger for the relaunch, that to me came a bit out of left-field. The time 'wasted' on Brawn, for example, could have better been used setup this development more.

And for my last criticism: the ending feels rather abrupt and some of the stakes, some of the more heavy developments in the book that are simply brushed off without any consequences whatsoever. It's not a bad ending for the teams Weird World adventure though, it does give them a nice 'where a team through thick and thin' moment but I still couldn't help but feel it was just a little too sudden. As stated earlier, this issue does have something of a cliffhanger or more accurately a few stingers for the relaunch but on the whole this first run of the Champions and this story-arc pretty neatly.

To wrap this Review up: are these issues worth picking up? Yes, they are. Not only are they just fun, much of which is because of the fantasy setting and the passion put into it by the creative team, but also because of the emotional development both Iron Heart and Nova go on. Anyone who is a fan of the Champions, or even Teen Titans for that matter, or who are even mildly interested in the premise or these characters should definitely check 'Warriors of the Weird' out. 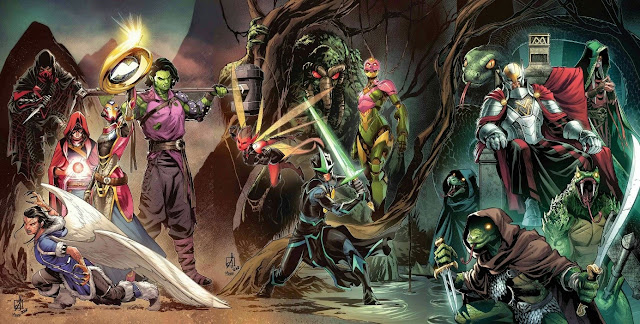